Media speculation about who Donald Trump will select as a running mate has been heating up in recent days. The fabled shortlist is said to have been whittled down to a handful including Chris Christie, Mike Pence, and Newt Gingrich. Trump’s camp is saying that the decision will be made this week. 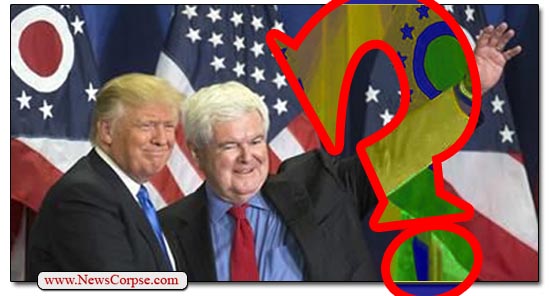 However, Fox News may have inadvertently let the rat out of the bag. They announced that they have suspended Newt Gingrich’s employment as a Fox News contributor due to the VP talk:

“Fox News Channel has mutually agreed to suspend its contributor agreement with former Speaker of the House, Newt Gingrich effective immediately. Due to the intense media speculation about Gingrich’s potential selection as Donald Trump’s Vice Presidential candidate, we felt it best to halt his contributor role on the network to avoid all conflicts of interest that may arise.”

Of course, Gingrich has been the subject of VP conjecture for months. As far back as May 20, Donald Trump himself told Fox News that he was “absolutely” on his shortlist. If Fox was concerned about avoiding conflicts of interest they ought to have suspended Gingrich then.

The question now is: Why would Fox News move to cut Gingrich loose just a few days before Trump’s decision will be made public? Does it make any sense that Fox would allow Gingrich to appear on the network for months after being tagged as a VP prospect and then ditch him a couple of days before they know for sure?

If Gingrich is not Trump’s choice, then Fox will have suspended him for a few days for nothing. It seems far more logical to have taken this step if Fox knows that Gingrich will be Trump’s running mate and they are getting out in front of the decision so they can say they removed Gingrich from the air prior to his selection.

On the other hand, this may mean nothing more than that Fox was derelict in suspending Gingrich’s contributor status, which should have been done long ago. But there is good reason to be suspicious about the timing. Either way, we’ll probably know by the end of the week. Stay tuned.