From the commencement of Donald Trump’s journey to the Republican nomination for president he has bragged about his super-awesome skills in television production and media spectacles. To be sure, he’s had some experience in these areas with his glitzy beauty pageants and schmaltzy Apprentice programs (although it’s unclear what his producing role was in either). 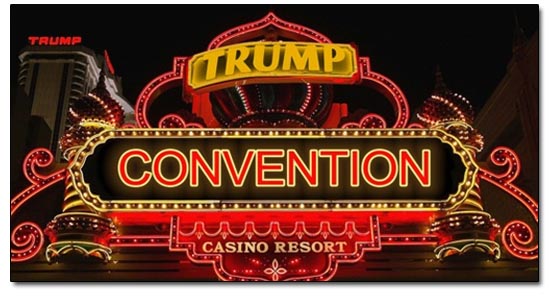 Prior to the Republican National Convention in Cleveland, Trump touted his alleged showbiz cred to build anticipation for a glossy entertainment-rich extravaganza. Last April he told the Washington Post that it was his intention to produce a “monumentally magnificent convention” that is “brilliantly staged.” As it turns out, he was only able to coax D-List talent like Scott Baio and Duck Dynasty’s Willie Robertson. Contrast that with the Democratic Convention’s roster of Meryl Streep, Paul Simon, Alicia Keys, and Katy Perry.

On the political front, Trump’s party has kept its distance from him with both of the former GOP presidents (Bush and Bush, Jr.) staying away, as well as both of the previous GOP nominees for president (McCain and Romney). Only two of the seventeen 2016 contenders bothered to show up, and John Kasich, the governor of the state that is hosting the convention refused to step foot inside of it. While at the DNC affair they exhibited Democratic star power like Sens. Bernie Sanders and Elizabeth Warren, Bill Clinton (of course), Joe Biden, and Michelle and Barack Obama.

Immediately following the RNC debacle Trump tweeted that it was “One of the best produced, including the incredible stage & set, in the history of conventions. Great unity! Big T.V. ratings!” That was before the reviews came in that were almost unanimously negative. Even prominent conservatives were bad-mouthing the event. For example:

Well done, @realDonaldTrump. You made Democrats a party of sunny patriotism and values.

You sure @billclinton didn't ask you to run?

How can it be that I am standing at my kitchen counter sobbing because of the messages being driven at the DNC? Where has the GOP gone?

As the reality set in that the GOP convention was a national turn off, Trump ran for cover, afraid of being associated with the losers responsible for it (i.e. himself). As reported in the New York Times:

“The Times asked Trump about why his convention seemed haphazardly thrown-together, unlike the very coordinated and on-message Democratic convention and unlike Republican conventions of the past. ‘I didn’t produce our show — I just showed up for the final speech on Thursday,’ he responded.”

If it’s true that Trump just showed up to give his speech, then he abdicated his responsibilities as the leader of his party. Every nominee owns their convention and campaign. Trump is saying that he was no more than a hired spokesman for the most important event in the entire campaign process.

That’s the sort of dishonest buck-passing that we could expect if Trump were to prevail in November. His notoriously thin skin, and his infamous narcissism, would never allow him to take responsibility for anything that had the taint of failure. Before it was apparent that the Republicans threw an epic dud, Trump was boasting that it was all his doing. Now he can’t run away fast enough. And it’s significant that the failures of the GOP convention were specifically in the areas that Trump claims to excel. It would be funny if the consequences weren’t so serious.