The final night of the Democratic National Convention had many memorable moments including speeches and performances by notables like House Minority Leader Nancy Pelosi, Kareem Abdul-Jabbar, and Katy Perry. And of course, the headliners for the evening, Chelsea Clinton introducing her mother Hillary Clinton.

However, what may be remembered as the most moving address of the week was the touching story of a grieving father whose misfortune hasn’t dampened his patriotism. 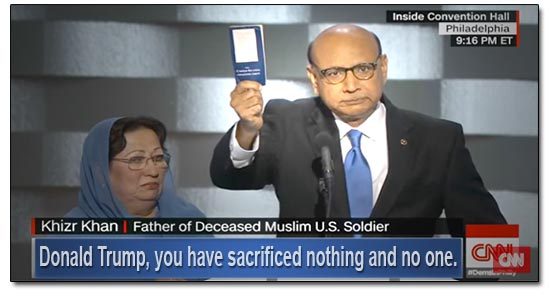 Khizr Khan is the father of U.S. Army Capt. Humayun Khan who was killed serving his country in Iraq. Mr. Khan addressed the delegates after a video wherein Clinton paid tribute to the fallen soldier. His comments were brief and to the point, beginning with his description of his family as “patriotic American Muslims with undivided loyalty to our country.” He was clearly moved by Clinton’s tribute to his son. And he was equally repulsed by Donald Trump’s campaign of bigotry and intolerance:

“Hillary Clinton was right when she called my son the best of America. If it was up to Donald Trump he never would have been in America. Donald Trump consistently smears the character of Muslims. He disrespects other minorities, women, judges, even his own party leadership. He wants to build walls and ban us from this country.

“Donald Trump, you’re asking Americans to trust you with their future. Let me ask you, have you even read the United States Constitution? I will gladly lend you my copy. In this document look for the words “liberty” and “equal protection of law.”

These poignant remarks perfectly illustrate what’s so hurtful and un-American about Trump’s efforts to demonize Muslims and other immigrant families. Trump regards the differences in people as threats to be quashed. He has no ability to recognize the shared values of diverse people who love freedom. That’s why he views refugees as disguised terrorists rather than victims who despise terrorism more than anyone. And it’s why Mr. Khan went on to beseech Trump to educate himself on the subject of true sacrifice:

“Have you ever been to Arlington Cemetery? Look at the graves of brave patriots who died defending the United States of America. You’ll see all faiths, genders, and ethnicities. You have sacrificed nothing and no one. We cannot solve our problems by building walls, sowing division. We are stronger together.”

Don’t hold your breath waiting for Trump to accept this challenge. He’s too busy pretending to care about veterans while ripping them off. And the last thing he wants is to abandon his campaign strategy of spreading fear and hatred. Because that’s literally all he has. And you know Khan’s remarks were powerful and effective because Fox News declined to air them, instead running an anti-Clinton commercial about Benghazi.

UPDATE: Trump responded to Mr. Khan’s remarks by insulting him and his wife. He accused Clinton of having written his statement. He falsely implied that Mrs. Khan was not allowed to speak. And in an appalling display of insensitivity and conceit, he claimed to have made sacrifices on par with that of the fallen soldier. He cited as an example that he has hired a lot of people. Oh my, what a sacrifice. That must have been so terribly difficult for him.

2 thoughts on “Muslim Father Of A Fallen Hero Shames Donald Trump: You Have Sacrificed Nothing”