If you have ever wondered where Glenn Beck, Sean Hannity et al, get their propensity for accusing every liberal or Democrat of being a Nazi, the mystery is solved. 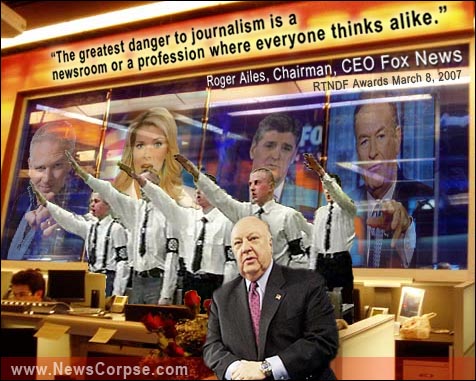 Roger Ailes is the chairman and CEO of Fox News. As such he can be considered the role model for his staff and the authority on the network’s journalistic doctrine. In an interview this week with The Daily Beast’s Howard Kurtz (Part 1, Part 2), Ailes demonstrated precisely the sort of example he hopes to set for his team. In response to a question about Juan Williams’ departure from NPR, Ailes said:

“They are, of course, Nazis. They have a kind of Nazi attitude. They are the left wing of Nazism. These guys don’t want any other point of view. They don’t even feel guilty using tax dollars to spout their propaganda. They are basically Air America with government funding to keep them alive.”

That’s right. The folks at NPR are synonymous with a genocidal regime that murdered millions and sought to create a vast tyrannical empire for a “master race.” I always suspected that Lake Woebegone’s predominately white, Christian residents were secretly fascists.

This wasn’t a slip of the tongue. He said it three times. And if this is what he says in public to a reporter for The Daily Beast and CNN, just imagine what he says privately to direct the activities of his news producers, correspondents, and anchors. And what must Mara Liasson, an NPR correspondent and Fox News contributor, think of Ailes trashing her primary employer this way?

Ailes is guilty of a typical anti-Semitic tactic of trivializing the Holocaust in an attempt to dampen its historical impact and ultimately deny its existence. This is illustrated further when Ailes defended Glenn Beck’s atrocious smear of George Soros as a Nazi collaborator. Ailes dismissed the criticism directed at Beck by disparaging an imagined cabal of…

“…left-wing rabbis who basically don’t think that anybody can ever use word, Holocaust, on the air.”

Of course, there is no support for that statement. The Jewish organizations that condemned Beck’s programs are not averse to using the word, they merely object to it being used to slander actual Holocaust survivors, and to turning it into a colloquial insult. However, Ailes apparently believes the word should be used more frequently, no matter the context, and aimed at any progressive individual or institution that he doesn’t like. And his network is evidence of that belief. (See Lewis Black’s Nazi Tourettes)

The interview revealed several other examples of the inherent bias of a network that calls itself “fair and balanced.” On President Obama, Ailes advanced the notion that he is somehow “foreign” saying that…

“He just has a different belief system than most Americans.”

That must be why most Americans voted for him and still prefer him to every potential Republican opponent. They also prefer him to our previous president, George W. Bush, whom Ailes praised saying…

“This poor guy, sitting down on his ranch clearing brush, gained a lot of respect for keeping his mouth shut.”

I may have to give him that one. Keeping his mouth shut may be the only way Bush could ever gain respect. However, Ailes must not be paying attention because Bush hasn’t set foot in Crawford since he left the White House. His faulty attention span also missed some critical facts regarding Rupert Murdoch’s political contributions:

“Rupert Murdoch’s worked for 60 years. He’s the biggest media mogul in the world. I don’t think anyone can tell him what to do with his money. That’s sort of his right.”

Except that the millions of dollars that Murdoch donated to partisan GOP campaigns didn’t come out of his pocket. It was from News Corp, so it was the shareholders who were paying for his electoral largesse.

Finally, Ailes couldn’t help taking a swipe at a perennial foe whom he apparently thinks is another enemy of America: Jon Stewart.

OK, let’s just set aside his hyperbolic derision of Stewart’s faith and patriotism. Ailes casts Stewart as crazy and hateful toward conservatives. But he sure gets along well with Bill O’Reilly, Newt Gingrich and many other conservatives who have been guests on his show. But here’s the fun part:

“If it wasn’t polarized, he couldn’t make a living. He makes a living by attacking conservatives and stirring up a liberal base against it. He loves polarization. He depends on it. If liberals and conservatives are all getting along, how good would that show be? It’d be a bomb.”

Couldn’t you make almost the exact same comment about Fox News? Just switch liberals and conservatives as the objects of attack and you have the Fox business model. And he’s right. Without the constant liberal bashing and polarization Fox would bomb. That’s because they don’t have any actual news to support their network.

Ailes exhibits a stunningly dense appreciation for reality. He is oblivious to what every objective analyst sees with crystal clarity. But the worst part remains his personal affinity for the sort of rhetoric that divides our nation. His embrace of Nazi and socialist slurs is a crucial part of the broadcast philosophy of Fox News, and now no one can wonder who set that repulsive and hostile tone that the rest of the network emulates.

Update: Roger Ailes has issued an apology of sorts. He sent a letter to Abe Foxman of the ADL saying that he regretted his use of the term “Nazi attitudes.” However the rest of the letter was a surreal justification for his language.

First he blamed it on his anger at NPR for having fired Juan Williams. Then he shifted gears and blamed it on a couple of rabbis with whom he had met to discuss Glenn Beck’s frequent comparisons of Nazis to Democrats, progressives and other Beck targets. He also defended Beck’s Smear-laden programs on George Soros by saying that his “Brainroom” had found the programs valid. For an apology he sure had a lot of other people to fault for his wrongdoing.

But the real flaw in the so-called apology is that Ailes sent it to the ADL. But it wasn’t the ADL whom he had called Nazis. It was the folks at NPR. I don’t think you can call it an apology if you don’t address it to the people you actually offended. It was more of a cowardly PR gesture.