Thursday Hillary Clinton delivered a scathing address that castigated Donald Trump for his affiliations with right-wing extremists. She fully documented her allegations and often used his own words for confirmation. Subsequently, Trump and his allies struck back with baseless accusations that Clinton was a bigot. He insisted that he was being unfairly maligned and that there was nothing untoward about his political views or relationships. But less than twenty-four hours later, Trump is already proving his extremist bona fides. 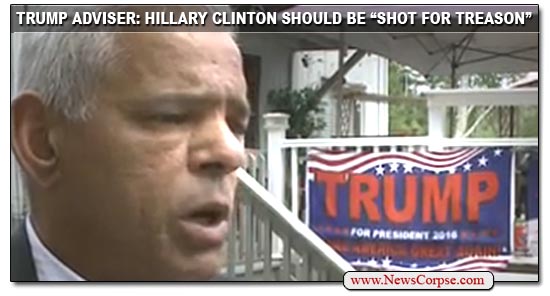 The latest instance began a few weeks ago when a Trump adviser went ballistic (so to speak) on Hillary Clinton during Jeff Kuhner’s talk radio show. New Hampshire state representative Al Baldasaro, who co-chairs the Trump campaign’s national veterans coalition, began ranting about Benghazi. Not surprisingly, he blamed Clinton for the whole thing:

“She is a disgrace for the lies that she told those mothers about their children that got killed over there in Benghazi. She dropped the ball on over 400 emails requesting back up security. Something’s wrong there. I wish they’d made the documents public on why Anderson was – the Ambassador Anderson – because in my mind I want to think were they moving guns? Were they doing something there? How did they know he was even there?”

First of all, the ambassador to Libya was Chris Stevens, something a veterans adviser ought to know. Secondly, accusing a murdered diplomat of unlawfully running guns, without any evidence, is beyond reprehensible. But Baldasaro wasn’t finished:

“This whole thing disgusts me. Hillary Clinton should be put in the firing line and shot for treason.”

That grotesque comment earned Baldasaro a visit from the U.S. Secret Service. You’ll notice that he never said that she should be tried or convicted. It’s the sort of hateful discharge that has become all too common among Trump’s associates. And for that matter, Trump himself. Recall his conjecture that only the “second amendment people” could stop Hillary Clinton from nominating Supreme Court justices.

Flash forward to the present. Trump gave an interview to Paul Steinhauser of New Hampshire’s NH1 News, and the subject came up again. It led to the following exchange (Video: Segment begins at 1:54):

Steinhauser: One of your good friends and one of your biggest supporters here in New Hampshire, state Rep. Al Baldasaro, he’s here today. He said some controversial things over the last month or two about Hillary Clinton, suggesting she should be put in front of a firing squad for treason. What do you think about his comments? Do you condone them?

Steinhauser: But you don’t condone any comments?

Trump’s awkward response was an obvious attempt to dodge the question. He seemed to think that if he said “veterans” enough (five times) the reporter would become hypnotized and unable proceed with the interview. That plan failed, and when asked again Trump feigned ignorance. He claimed that he needed to know what Baldasaro said, even though Steinhauser had just told him. The only principled response to such a question is “I do not condone any calls for violence of any kind.” It isn’t really that hard if you have principles.

What makes this even worse is that Trump lied about not knowing what Baldasaro said. When the comment was originally made in July, Trump was asked to respond. His campaign spokesperson, Hope Hicks, told NH1 News that “We’re incredibly grateful for his support, but we don’t agree with his comments.” So apparently Trump did know about Baldasaro’s repugnant comments and instructed Hicks to renounce them. Unless his spokesperson is putting words in his mouth without consulting him. Neither of those options represent the qualities necessary for national leadership. And why is he refusing to renounce the same comments now? Is he afraid of offending his friends in the alt-right?

Trump’s supporters have a history of expressing their views about Clinton with overtly violent overtones. For example, the Riverside County GOP tweeted a photo of an executioner with the caption “Ready for Hillary.” Ted Nugent shared a video on Facebook of Clinton being shot by Bernie Sanders. The death threats aimed at Clinton frequently come from notable Republicans, rather than from anonymous Internet trolls. And Trump’s response to these incidents is clearly encouraging this abhorrent behavior.