Desperation is often best measured by the ludicrous lengths one will go to in order to attack an opponent. And by that measure Fox News is off the charts desperate. They appear to have made the calculation that Hillary Clinton’s prospects for beating the pants off of Donald Trump are so great that there is no depth too low for them to sink to. Case in point, the story they posted Saturday on their Fox Nation website: “KKK Grand Dragon Endorses Hillary Clinton.” 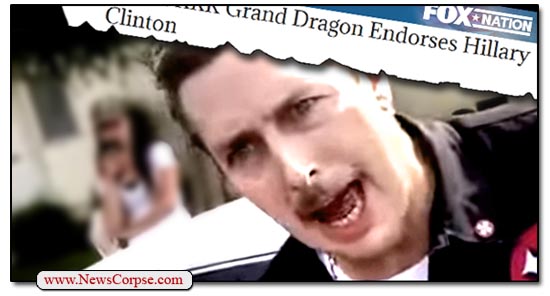 Fox Nation has never been known for honest reporting (see the ebook Fox Nation vs. Reality that catalogs their blatant lies). And this story affirms their shameful reputation. It was published just as Trump is vainly attempting to deflect the racism that is central to his campaign. His futile strategy has been to try to turn the tables by calling Clinton a bigot. Never mind that her support among African-Americans is over eighty percent compared to his in the low single digits.

Fox Nation’s article was sourced to a posting by Gateway Pundit Jim Hoft, aka the Dumbest Man on the Internet (serioulsy, Google it)). The epic wrongness of it is readily apparent to anyone with an IQ higher than their age.

First of all, Hoft had to reach back to a story that was published almost six months ago. The original story was about a confrontation between Ku Klux Klan members in Anaheim, CA, with Klan protesters and police. There was no current event that might have justified reprising the story. It was essentially just a memory he felt like revisiting. So of course Fox links to it as if it were breaking. The only commentary attached to it was an excerpted exchange between a professor who videotaped the affair and the leader of the tiny Klan chapter that organized it.

In that video Prof. Brian Levin, director of the Center for the Study of Hate and
Extremism at California State University in San Bernardino, asked Grand Dragon Will Quigg who he was supporting for president. Quigg answered simply “Hillary Clinton.” And on the basis of that, Hoft and Fox News composed headlines that proclaimed the Klan’s endorsement of Clinton.

However, much was left out of Fox’s reporting. For instance, the Huffington Post published an article last March on this wherein they got a more complete explanation of Quigg’s alleged endorsement. He said at the time that he believes Clinton has a secret agenda that is aligned with his white supremacist hate group:

“She is telling everybody one thing, but she has a hidden agenda,” said Quigg. “She’s telling everybody what they want to hear so she can get elected, because she’s Bill Clinton’s wife, she’s close to the Bushes. Once she’s in the presidency, she’s going to come out and her true colors are going to show. Border policies are going to be put in place. Our Second Amendment rights that she’s saying she’s against now, she’s not against. She’s just our choice for the presidency.”

Sounds like Quigg is describing Trump’s platform perfectly. Where he got the idea that Clinton is a Klan double agent is a mystery that is confined to his diseased brain. However, Prof. Levin, an expert on racial hate groups, had something to say about Quigg’s “endorsement” that was also missing from Fox’s reporting:

“It’s not true,” Levin said. “His recent publicized change of heart stands in sharp contrast to his consistent and effusive support over the last six months for Mr. Trump. I just totally don’t buy it. Quigg is playing everybody. […] These guys play the press all the time. Quigg is just pivoting. He’ll get some attention and he knows it’ll take a little heat off Trump.”

Further analysis holds that Quigg is distancing himself from a Klan rival, David Duke, who has endorsed Trump. Additionally, Quigg may be trying to avoid undermining Trump while simultaneously tarnishing Clinton. He knows that the Klan’s support would hurt whomever receives it, so he is doling it out strategically. However, he has been expressing his devotion to Trump for over a year, as evidenced by this tweet:

@realDonaldTrump You Sir are the only hope we have of getting WHITE AMERICA BACK! WE all will be voting for you! CHURCH OF INVISABLE EMPIRE

This isn’t the first time that Fox has tried to draw the dishonest connection between Clinton and the Klan. Just a couple of days ago Fox Nation posted an article with this headline: “Flashback: Hillary Clinton Praised Former KKK Member Robert Byrd as ‘Friend and Mentor'” That was another retread that was just as deceptive. It referenced a six month old column in the ultra-rightist Daily Caller that itself referenced a video from 2010 of Clinton offering condolences following the death of Sen. Byrd. Conservatives frequently try to smear the late senator despite the fact that he renounced his youthful Klan membership decades ago. In no uncertain terms he apologized and condemned racism and the groups that espouse it. He was honored by the NAACP in a letter after he died as a “Champion for Civil Rights and Liberties.”

In light of the above, it’s clear that Fox News is frantically trying to defame Clinton by inventing an utterly false association with a despised organization. It’s a far-fetched effort, particularly since many other Klan groups have already pledged their allegiance to Donald Trump. Many white supremacists are actively campaigning for him. And no amount of lies and race-baiting by Fox can erase the stain of Trump’s bigotry that has been so much a part of his campaign for the past year.