The media today is all abuzz about recidivist sexter Anthony Weiner. Clearly this guy has an addiction that is driving him into self-destructive behavior. There is a temptation among many in the press to make a joke of it, but the consequences have proven to be profoundly serious. His wife, Huma Abedin, announced that they will be separating. There is nothing funny about a broken family with an infant child. What’s funny is that the media gets more heated about quirky behavior that hurts no one, than they do about the sexual harassment by former Fox News CEO Roger Ailes, who left a trail of victims. 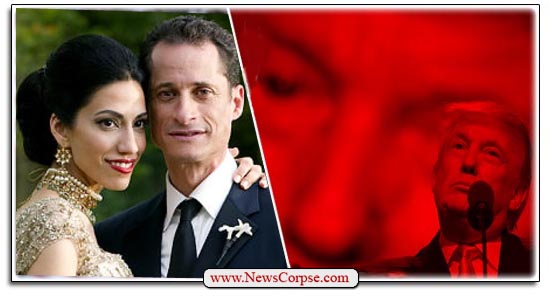 In response to this marital misery, Donald Trump has lived down to expectations and found a way to take the low road as usual. Rather than express his condolences, or any concern for the child, Trump seemed overcome with glee for what he perceives to be a positive development. One that is ripe with political opportunity. His first response to the sad news was that:

“”Huma is making a very wise decision. I know Anthony Weiner well, and she will be far better off without him.”

That is an utterly disingenuous comment. Donald Trump has absolutely no idea what is best for Huma or anyone else in that family. What’s more, he doesn’t give a rat’s ass about them. He regards Huma as a traitor with allegiances to the Muslim Brotherhood. She is also an accomplice to the imagined crimes of Hillary Clinton in his conspiratorial mind. It it simply absurd for him to suddenly pretend that he has her best interests at heart. But he had more to say that just made things even worse:

“I only worry for the country in that Hillary Clinton was careless and negligent in allowing Weiner to have such close proximity to highly classified information. Who knows what he learned and who he told? It’s just another example of Hillary Clinton’s bad judgment. It is possible that our country and its security have been greatly compromised by this.”

Try to follow Trump’s logic here. He asserts that Clinton “allowed” Weiner to have access to classified information. Weiner would have gotten that information from his wife, Huma, who is also a close aide to Clinton. So Trump believes that Huma, who has high-level security clearances from the government, is blabbing state secrets to her libidinous hubby.

The assumption Trump has to make to arrive at that conclusion is pure, unadulterated sexism. It is insulting to all women. He thinks that women who work in sensitive government jobs are untrustworthy gossips who divulge secrets in pillow talk. In his mind women are undisciplined chatterboxes with no sense of duty or patriotism. Would he be similarly worried for the country about Sarah Palin or Michele Bachmann spilling the beans to their spouses?

The obvious contempt Trump has for the integrity of women is appalling. You would never hear him say anything similar about a man sharing government secrets with his wife. And if he does think that that is a credible risk, then you have to wonder what classified info he would be yakking to Melania?

It’s no surprise that the the media is getting its thrills from the tabloid sexcapades of a fallen congressman who has no power or position. But we should be far more concerned with the misogyny of the Republican nominee for president. If Donald Trump doesn’t think women can serve the nation honorably, then he has no business asking for their votes. Or for that matter, the votes of their husbands, fathers, brothers, and sons.