On Friday Donald Trump went to Detroit to speak at the Great Faith Ministries Church. It was billed by the campaign as an attempt to reach out to African-American voters. However, most Americans saw it as a disingenuous political stunt aimed at making white voters more comfortable with a candidate who is widely perceived as racist. The speech itself was brazenly solicitous and devoid of sincerity. 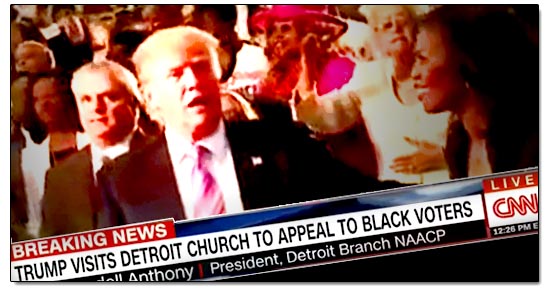 The first problem with Trump’s address was his opening assertion that he “meant it from the heart”. Which was difficult to believe considering the awkward way he read it from the script he was holding. The entire speech was prepared for him in advance. And much of his delivery sounded like he was reading it for the first time.

Trump recited an array of platitudes with little substance behind them. He talked about the African-American church being “the conscience of our country” and having the “spirit of charity and unity that binds us all together.” Astonishingly, he also said that “those who seek office do not do enough to step into the community and learn what is going on.” This from a candidate who just made his first foray into a minority community. What’s more, he only did so after being castigated for giving black themed speeches to majority white audiences.

Trump also spoke about the economy and jobs. He lamented that “When I see wages falling, people out of work, I know the hardships this inflicts.” Oh really? How does he know that? He has never suffered from low wages or unemployment. Perhaps he knows as a result of observing the people his bankrupt businesses have thrown into poverty. Or maybe he’s seen families whose jobs were eliminated when he moved his manufacturing operations to China, Bangladesh, and Mexico.

Among those who saw Trump’s speech was Wendell Anthony, the president of the Detroit chapter of the NAACP. Anthony appeared on CNN to respond to the insipid cliches Trump disgorged. He began by noting that Trump’s rhetoric “is doing no more than dividing this nation.” From there he rattled off many of the examples of Trump’s long record of bigotry. From lawsuits for racially discriminating against prospective black tenants, to his impractical and unlawful approach to immigration. Anthony reminded viewers that Trump said he didn’t want black people counting his money (only Jews). He also mentioned Trump’s opposition to livable wages. He railed against Trump’s campaign of deception saying:

“This is tantamount to a wolf coming to the farmhouse and asking the sheep to ‘let me lead you to greener pastures.’ When the pastures you’re gonna lead us to have no water, have nothing but weeds and dandelions in them, and do not increase us, but yet they diminish us. It’s nothing but a ruse. It’s nothing but a scam.”

Given that Trump’s support among African-Americans is hovering between two percent and zero, Anthony’s views are likely widely held. But he wasn’t finished. Past Republican strategy is visible in Trump’s current game plan. Anthony recognized the tactics of Lee Atwater that brought Nixon and Reagan and Bush to power. It’s the old southern strategy, he said, updated to 2016. And he wouldn’t let Trump’s obsession with President Obama’s birth certificate go unnoticed. Trump is one of the most persistent purveyors of the racist birther theories.

Most prominent in Anthony’s remarks was his view that Trump’s campaign rhetoric can’t be trusted. He continually changes what he says to conform to his audience or to escape ridicule when he says something stupid (i.e. daily). So it becomes impossible to predict which Trump will show up on any given occasion. And because Trump so often contradicts himself, Anthony wisely refuses to take him at face value saying that:

“You cannot determine the nature of a tree by the bark that it wears or but the fruit that it bears. Donald Trump has borne bad fruit. There are worms in it. And when you eat it you get sick. And when you go to the hospital, he doesn’t even want you have ObamaCare.”

He paints a pretty picture, doesn’t he? Here is Anthony’s whole segment on CNN. If Trump truly believes what he said about listening to the black community, he ought to watch this video. It is more representative than anything he’ll hear from the sycophants in his campaign.