On Friday Hillary Clinton spoke to a group of donors about how “deplorable” many of Donald Trump’s followers are. She correctly pointed out that his campaign seems to appeal to the racist, sexist, homophobic faction in the Republican Party. In other words … the Republican Party. Almost immediately the StormTrumpers went on the attack accusing Clinton of insulting his pure and virtuous supporters. You know, the ones who beat up protesters and think President Obama is a gay, Muslim, communist from Kenya. Today Clinton got confirmation that she was right. 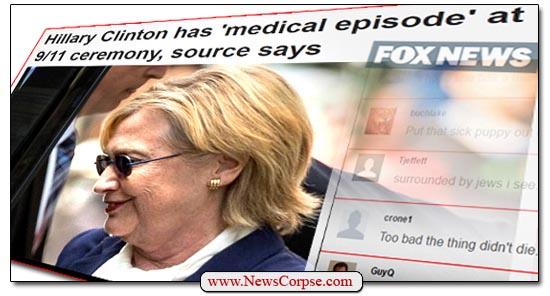 While attending the ceremonies commemorating the fifteenth anniversary of the terrorist attack on September 11,2001, Clinton briefly fell ill. She left the event early to rest up for bit at her daughter Chelsea’s apartment. Fox News (of course) broke this story with allusions to her overall health for which they had no evidence. The rest of the media piled on shortly thereafter. The so-called “medical episode” was over in less than an hour.

However, the freak-out on the Fox News website had just begun. Commenters on the Clinton story seemed determined to prove that they were, indeed, deplorable sleazeballs, completely devoid of common decency. For many, the only problem with Clinton’s illness was that it wasn’t fatal. Have a look:

These are the folks who are moaning about having been called deplorable. They openly wish for the death of a someone simply because they have political differences of opinion. And this isn’t a unique circumstance (see The Collected Hate Speech Of The Fox News Community). Yet they consider themselves to be patriotic Americans. Well, that isn’t the America that I know. And it isn’t the America that is being honored on this historic anniversary. For the Fox News fans to pick this day of national unity to express these grotesque feelings is utterly atrocious. If they don’t like being called deplorable they can fix that pretty easily: Stop being deplorable.