With everything that is circling the media drain at the moment, Donald Trump has proven once again that he is an incompetent candidate and his purported media prowess is a myth. The most prominent story currently getting play is about Hillary Clinton’s remark that “you can put half of Trump supporters into what I call the ‘basket of deplorables.’” She’s wrong of course. It’s way more than half.

So the Trump Team set off to exploit what they regard as the “worst mistake of the political season.” They produced an ad (below) featuring Clinton reciting the allegedly controversial remarks. There’s just one problem. 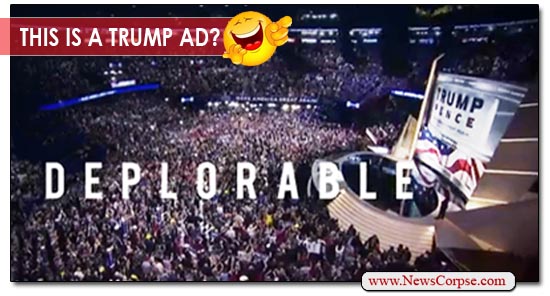 The ad’s visual are mostly of Clinton and stadium audiences cheering wildly. Trump’s audiences. If you watch it with the sound off it appears to be a positive presentation of Clinton on the campaign trail. What’s more, nowhere in the ad does it say that Clinton’s comments were wrong. The gist is that they insult Trump’s voters. But why would any of them feel insulted unless they thought it applied to them? They’re assuming that they are in the half that Clinton called deplorable. In effect, they are admitting that they are racist, sexist, homophobic, etc.

As the ad proceeds it contains shots of a Trump a rally with the word “DEPLORABLE” over it like a label. Then Clinton’s words – racist, sexist, homophobic, xenophobic – are played over video of Trump supporters as if they are examples of what she’s referring to. The ad ends with a narrator saying that Clinton is “viciously demonizing hard working people like you.” But by then the damage is done.

The visual messaging in this ad is powerfully pro-Clinton. The negative tone of the voiceover is unlikely to carry much weight. The theory behind this was explained by former CBS political correspondent Lesley Stahl who was schooled by a Reagan operative on the optics of reporting. She had broadcast a critical segment about Reagan’s funding cuts for children with disabilities and public health. The piece showed him speaking at the Special Olympics and a nursing home. The next day Reagan aide Richard Darman called to thank her. This exchange followed:

Darman: Way to go, kiddo. What a great piece. We loved it.
Stahl: Didn’t you hear what I said?
Darman: Nobody heard what you said.
Stahl: Come again?
Darman: You guys in Televisionland haven’t figured it out, have you? When the pictures are powerful and emotional, they override if not completely drown out the sound. I mean it, Lesley. Nobody heard you.

Because Stahl’s piece spoke about some dreadful policies by Reagan, while showing him looking dapper at popular events and institutions, what she said simply did not register. Apparently Trump’s media team still has not learned that lesson. And all this new ad will do is amplify the message that Trump appeals to a deplorable community of bigots. His campaign says they will be spending two million dollars to air this ad in swing states like Ohio, Florida, Pennsylvania, and North Carolina. Clinton should send them a thank you note.

4 thoughts on “LMFAO: Donald Trump Just Made A Pro-Clinton ‘Deplorables’ Ad – No, Really!”