The Trump family of whiners is continuing to complain about what they perceive as poor treatment from the media. Never mind that Donald Trump has consumed far more air time than any other candidate. Or that he has Fox News (the highest rated cable news network) dedicated 24/7 to his election. Somehow the delusion that they are victims keeps seeping into their daily bitchfest. 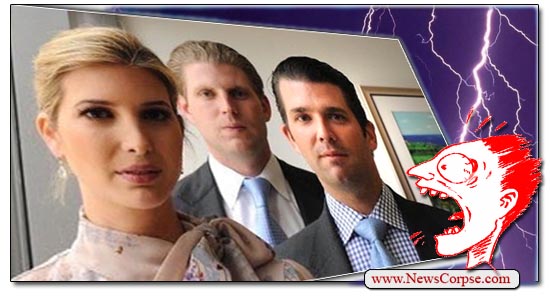 The latest lament has Little Don expressing his belief that the media is plotting to “trip up” his father by asking him hard questions. You know, questions like what does he know, and what would he do as president. He whines about his false impression that Papa Trump is being treated unfairly. Then he floats his theory that it’s all a conspiracy to influence the moderators of the upcoming debates. Actually, the opposite is true.

This all occurred during an interview with Philadelphia radio host Chris Stigall. But the Trumpette really took a flyer when he sought to accuse the media of being biased in favor of Hillary Clinton

“The media has been her number one surrogate in this. Without the media this wouldn’t even be a contest, but the media has built her up. They’ve let her slide on every indiscrepancy, on every lie, on every DNC game trying to get Bernie Sanders out of this thing. If Republicans were doing that, they’d be warming up the gas chamber right now.”

Seriously? Little Don is comparing imaginary unfair press coverage to the mass murder committed by Nazis in World War II? It is perpetually puzzling how these cretins can sink to such heinous rhetoric. They seem to have no filter that warns them about the injury they do to the memory of people who truly suffered such atrocities. Although it’s not inconceivable that they do it intentionally to dog-whistle at their deplorable, alt-right supporters.

For the record, Donald Trump has not only been covered more than his opponents, he has been covered more positively. A study by Harvard University’s Shorenstein Center on Media examined all the coverage and arrived at these results:

“The report shows that during the year 2015, major news outlets covered Donald Trump in a way that was unusual given his low initial polling numbers—a high volume of media coverage preceded Trump’s rise in the polls. Trump’s coverage was positive in tone—he received far more ‘good press’ than ‘bad press.’ The volume and tone of the coverage helped propel Trump to the top of Republican polls.”

Overall, the study found that “Trump’s coverage was roughly two-to-one favorable.” At the same time Hillary Clinton’s coverage was (and is) markedly negative:

The evidence of the pro-Trump coverage continues to this day. Clinton is hammered incessantly about old email stories and speculation about her health. On the other hand, Trump’s current scandals are virtually ignored. Just yesterday there were stories about his unsavory business ties and his corrupt foundation. Today those stories are already off the table. And just try getting the press to ask him about his tax returns two days in a row.

Setting aside his offensive analogy, Trump. Jr. is right about one thing: “Without the media this wouldn’t even be a contest.” That’s true, although not in the way he intended. Had it not been for the ratings-obsessed media’s efforts to prop up a bigoted, narcissistic demagogue, Trump would have been a long forgotten punch line by now. The press’ attitude toward Trump was best summarized by CBS chief executive Leslie Moonves: “It may not be good for America, but it’s damn good for CBS.”

One thought on “Little Donnie Trump, Jr. Warns About Media ‘Warming Up The Gas Chamber’ For Daddy”