The 2016 primary campaign for the Republican nomination for president has been accurately portrayed as a circus. It included seventeen candidates, most with little experience, but an abundance of ego, bluster, and a determination to divide the American people. The ringmaster of the show was Donald Trump, who was given the vast majority of media coverage virtually guaranteeing his victory. 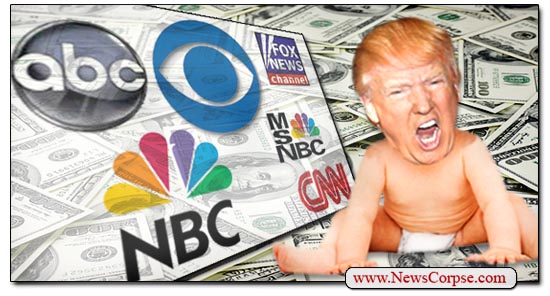 Now a study by Harvard University’s Shorenstein Center on Media, Politics, and Public Policy has certified conclusions that were fairly obvious even to casual observers. The study’s authors open with a summary of their findings:

“The report shows that during the year 2015, major news outlets covered Donald Trump in a way that was unusual given his low initial polling numbers—a high volume of media coverage preceded Trump’s rise in the polls. Trump’s coverage was positive in tone—he received far more ‘good press’ than ‘bad press.’ The volume and tone of the coverage helped propel Trump to the top of Republican polls.”

The study notes that “media exposure is arguably the most important” indicator of success for primary contestants, and Trump received more than his fair share of it. What’s more, his coverage came despite the fact that he had not earned it by the conventional methods of attracting media attention for politicians: standing in the polls and fund raising. So why did the press lean over backwards to focus on Trump at a time when he plainly didn’t deserve it? According to the study:

“The answer is that journalists were behaving in their normal way. Although journalists play a political brokering role in presidential primaries, their decisions are driven by news values rather than political values. Journalists are attracted to the new, the unusual, the sensational—the type of story material that will catch and hold an audience’s attention. Trump fit that need as no other candidate in recent memory. Trump is arguably the first bona fide media-created presidential nominee.”

Donald Trump had bewitched the media with his celebrity from having hosted a TV game show for fourteen years. In addition to that he had a tendency to fly off the handle without notice. You could never be sure when he might start screaming the “N” word or slap an immigrant orphan across the face. He had that “train wreck” allure that the media craves but fails to acknowledge:

“Journalists seemed unmindful that they and not the electorate were Trump’s first audience. Trump exploited their lust for riveting stories. He didn’t have any other option. He had no constituency base and no claim to presidential credentials. […] The politics of outrage was his edge, and the press became his dependable if unwitting ally.”

The study found that the advertising equivalent value of the media coverage Trump received from the outlets they reviewed came to about $55 million. They acknowledge that this number was an underestimate of Trump’s total take if the rest of the media were included. In that case the number would be closer to two billion dollars. Also, this calculation only included coverage that was either positive or neutral. And on that measure the study found that “Across all the outlets, Trump’s coverage was roughly two-to-one favorable.”

Concurrent with the media infatuation for Trump, the nation’s press was taking a diametrically opposite stance toward the likely Democratic nominee, Hillary Clinton. The study found that “Clinton had by far the most negative coverage of any candidate,” which drove the increase in her unfavorable poll ratings. She addressed this recently and was mocked for pointing out the obvious. But there was indeed an unmistakable bias that was evident across the board, and most prominently at Fox News (big surprise).

“Whereas media coverage helped build up Trump, it helped tear down Clinton. Trump’s positive coverage was the equivalent of millions of dollars in ad-buys in his favor, whereas Clinton’s negative coverage can be equated to millions of dollars in attack ads, with her on the receiving end. Of the eight news outlets in our study, Fox News easily led the way. Clinton received 291 negative reports on Fox, compared with only 39 positive ones, most of which were in the context of poll results that showed her with a wide lead.”

So the next time you hear someone complain that the media is liberal you’ll understand what a load of bull that is, and always has been. When the facts are compiled, and dispassionately examined, the truth is revealed. This study by Harvard should become mandatory reading for everyone in journalism school and, more importantly, everyone in journalism. And don’t forget the confession of Les Moonves, the CEO of CBS, who said of the Trump effect that “It may not be good for America, but it’s damn good for CBS.” That is where their loyalties lie.