Last week news surfaced that Donald Trump made an illegal donation to Florida’s attorney general Pam Bondi. Just days later she dropped a fraud investigation of his Trump University. The timing of the payoff raised speculation about corruption and bribery. Additionally, the $25,000 gift to Bondi’s political action committee violated laws governing the activities of charitable foundations. Trump was required to pay a $2,500 fine and reimburse his foundation. 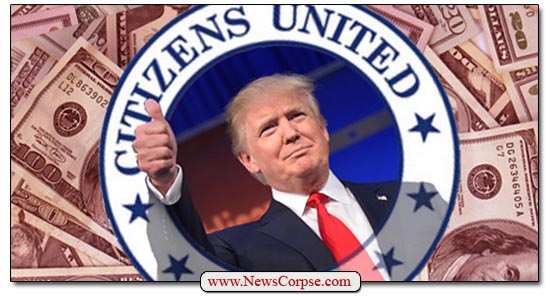 Now there is news of fresh corruption on Trump’s part. A new report reveals that the Trump Foundation also paid out $100,000 to a group battling the attorney general of New York. At the time AG Eric Schneiderman was already suing Trump U. for defrauding students of the phony school.

The donation this time is troubling for several reasons. While this gift was not illegal, it reeks of political corruption. Citizens United, the recipient of the 100 G’s, is best known for its role in the Supreme Court decision to allow corporations and the wealthy to contribute unlimited amounts to political causes without disclosure. They also happened to be suing Schneiderman when Trump made his donation. Trump must have seen this as an irresistible opportunity to escalate his attack on the New York AG. He had already been embroiled in very public fight for months. Trump’s anti-Schneiderman blitz included lawsuits, ethics complaints, and Trumpian style Twitter tirades that consisted mainly of insults and smears. And now he was bankrolling another flank in the battle.

There appears to be a clear pattern of Trump using his ostensibly charitable foundation as a vehicle for funneling tax-free dollars into projects that benefit him personally and politically. The gift to Citizens United was made around the same time that they were suing Schneiderman. It was the first time the Trump foundation donated to Citizens United. And it was the largest gift dispensed by his Foundation that year. By comparison, the Police Athletics League got only a quarter of that amount.

This web of ultra-rightist conspirators deepens the perception of dirty politics that permeates the Trump campaign. And the interweaving of Trump’s personal and political objectives stretches the outer boundaries of ethical behavior. His foundation operates as a virtual slush fund to advance his private interests.

Meanwhile, the media obsesses over the Clinton Foundation that has devoted billions of dollars to saving lives around the world. It’s a press fetish that persists despite the absence of any evidence of wrongdoing. Yet somehow they manage to assert some sort of equivalence between the two. That is nothing short of journalistic malpractice that helps Trump prop up his criminal enterprise. And it’s an ethical failure the media needs to correct.