Viewers of Monday night’s presidential debate were treated to a royal drubbing of historic proportions. Hillary Clinton so thoroughly hammered Donald Trump that the famously teetotaling Republican may have gone out afterward and actually got hammered. At least that would explain his TWI (Tweeting While Incoherent). However, Fox News viewers were also entertained by a commercial that directly addressed a prominent Trump campaign theme. 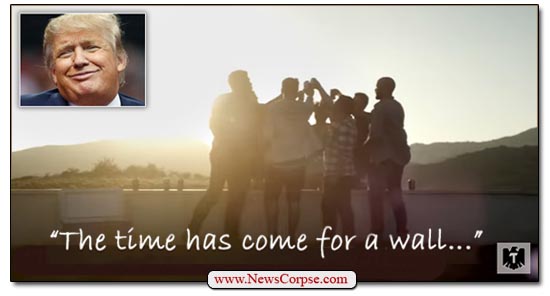 The ad for Tecate Beer began with a panoramic aerial shot of the southwestern desert representing the U.S./ Mexican border. As it focused in on a long and imposing barrier the narrator said:

“The time has come for a wall. A tremendous wall. The best wall.”

That’s right. This beer ad was stepping into the contentious debate over immigration and Trump’s blockhead solution to a problem he clearly doesn’t understand. But it doesn’t stop there. The narrator continues:

“The Tecate beer wall. A wall that brings us together. This wall may be small, but it’s going to be huge. You’re welcome, America.”

And with that Donald Trump has lost the beer vote. Can the white, non-college educated, working class citizens who have formed his base still support him after this? These are the folks about whom Trump said “I love the poorly educated.” They are the voters that the media is constantly asking “Which candidate would you rather have a beer with?” [Note: that has always been one of the most idiotic questions ever asked. It implies that some souse at the end of the bar who might be good company would make a good president]. Consider also that no one can have a beer with Trump because he doesn’t drink. He claims that he has never even tasted alcohol. That’s just another way in which the elitist, trust fund baby, billionaire Trump cannot relate to ordinary Americans.

This comical ad actually raises a serious issue. It’s one that Trump’s critics have articulated repeatedly. You solve problems by building bridges, not walls. Trump’s racist attacks on Latinos and his shallow grasp of international relations are brilliantly exposed and extinguish in these thirty seconds.

The marketing team for this Mexican brew deserves respect for their creativity and courage. And buying time on Fox News to air it was a stroke of genius. Not because Fox viewers will get it and come to their senses. They won’t. But because it will earn more media attention for trolling the network that created Trump and has served as the PR division of his campaign. Well done.