Live television always holds out the possibility of unanticipated “contributions” to the program. The “Curvy Couch” potatoes of Fox & Friends found that out this morning during a remote outside the studio. 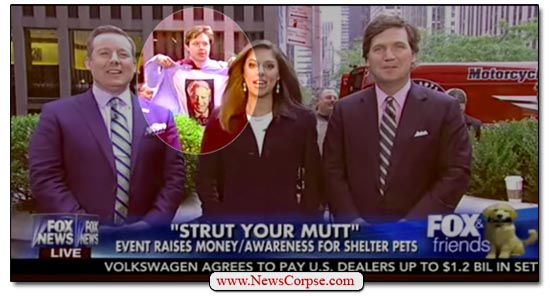 While introducing a fluffy segment on shelter pets, a crazed figure pops up behind the hosts. He then removes his shirt and tie to reveal a t-shirt with a picture of Bill Clinton above the word “Rape.” Repeatedly shouting “Bill Clinton is a rapist,” the intruder attempts to jump over the barriers protecting the set. The hosts giggle and try to remain composed as security drags the protester away. It’s actually pretty funny, however, there is a serious subtext to the event.

First of all, the reckless and unfounded allegations against Bill Clinton are the work of nut job conspiracy theorists like Alex Jones of Infowars. In fact. Jones actually made a public offer to pay $1,000.00 to anyone who successfully got on the air wearing that shirt (which he sells on his website) and shouting that message. Presumably that guy can use the money right about mow – for bail.

More to the point, while this incident was obviously carried out by a certified fruitcake, the exact same message has played out on Fox News by their own anchors and guests. In June of last year Megyn Kelly raised the issue saying that “Bill Clinton was accused of rape. He has been accused by several women of sexually assaulting them.” F&F Anchor Steve Doocy interviewed disreputable rumor monger Ed Klein whose book charges that Bill raped Hillary. Doocy affirmed Klein’s nonsense asserting, without foundation, that his “sources are impeccable.” Frequent Fox guest Ann Coulter gave a speech at CPAC in March of 2013 wherein she ranted that “The keynote speaker at the Democratic National Convention this year was forcible rapist Bill Clinton.” Fox contributor Katie Pavlich wrote that “Bill Clinton is probably a Rapist.”

If that isn’t enough, just last May Sean Hannity hosted Donald Trump as they attempted to dismiss his tawdry past. For the record, that includes three marriages and infidelities too numerous to cite. He literally bragged about them. What’s more, Trump himself is currently being sued for the rape of a thirteen year old girl. He was also accused of rape by his ex-wife, Ivana. So of course this conversation ignored all of that and quickly diverted to a comparison to Bill Clinton:

So whatever the state of mind of the wacko who tried to crash Fox’s broadcast there is one thing that is abundantly clear. He has the same political positions as the Fox News regulars. They might as well have let him join the others on the air. Who knows, maybe security took him to see someone in Human Resources and they gave him a job. Stay tuned for the Photobomber News Hour on Fox News.