In the rough and tumble game of politics there are some surprising allegiances and discord. This year has seen the Republican nominee for president, Donald Trump, accuse rivals of being dummies, liars, and foreigners. And yet, those vanquished foes eventually succumbed to the siren call of political whoredom and endorsed him anyway. Which proves the old adage “with friends like these who needs enemas?” 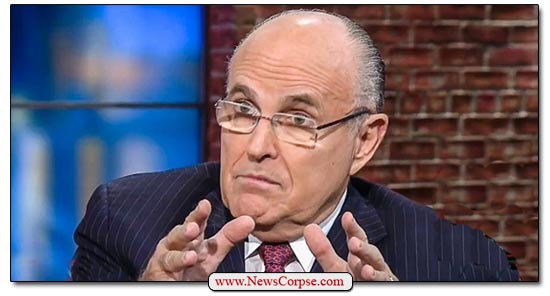 Likewise, there are familial frictions that can strain otherwise warm relationships. The profound respect for Republican family values is displayed perfectly by Trump, who values families so much he’s had three of them, so far. He shares that propensity for multiple wives and mistresses with his devoted surrogate and 9/11 Tourettes sufferer, Rudy Giuliani. The former New York mayor has carried Trump’s banner into battle with a zeal generally observed in mating hyenas.

That’s why it may come as a shock to him that his his daughter has joined the opposition. Politico is reporting that Caroline Giuliani is supporting Hillary Clinton for president. In a statement to Politico she said:

“I love Hillary, I think she’s by far the most qualified candidate that we’ve had in a long while.”

In a Facebook post she proudly declared “I’ve been pro-Hillary all along” as she praised an article in the Huffington Post by a Bernie Sanders supporter who realized that Clinton was America’s best hope.

Caroline also noted that her dad is aware of her Democratic leanings. She previously voted for President Obama, so Rudy has had time to get used to the idea. Caroline said that “He knows and is fully comfortable with it and thinks I have a right to my opinion.” That’s mighty open-minded of a man whose choice for president has called Clinton “the devil.”

But Caroline isn’t alone in her preference for Clinton among iconic GOP offspring. Barbara Bush, the daughter of former President George W. Bush, attended a fundraiser for Clinton in Paris last week. Barbara joins her grandpa, George H.W. Bush, who recently told Kathleen Kennedy Townsend that he is on Team Hillary.

Then there is John McCain’s granddaughter, also named Caroline, who supports Clinton and wants Trump “to be humiliated in November” because “loyalty to party means nothing when the party has been poisoned.” And Ronald Reagan’s son Ron is a committed liberal. And his other son Michael tweeted that his father would not support Trump and that the former First Lady Nancy “would vote for HRC.”

These famous Republican kids join scores of other Republicans who support Clinton. They are nauseated by Donald Trump and embarrassed that he managed to con enough voters to snag their Party’s nomination. It’s an encouraging sign that such prominent conservatives are speaking out. And with a month to go before election day we’ll soon find out whether the deplorable faction of the GOP can prevail.