Generally when a rabidly bigoted Fox News host makes headlines it’s safe to guess that the subject is Bill O’Reilly or Sean Hannity. However, a lesser known figure is challenging the network’s chumpians for dipshit supremacy. 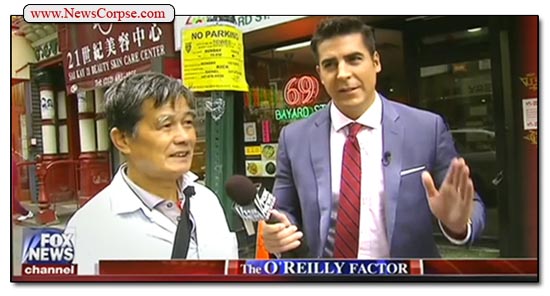 Jesse Watters is a producer for The O’Reilly Factor and hosts his own Watters World that purports to be funny. He’s also the closeted editor of the ultra-conservative and lie-riddled Fox Nation website (see Fox Nation vs. Reality). His exploits have drawn some attention in the past primarily for their rank stupidity. Stephen Colbert roasted Watters deliciously on his old Colbert Report.

This week Watters outdid himself with a blatantly racist trip to New York’s Chinatown (video below). He managed to fire off every offensive stereotype in the book. The repulsive segment has been universally condemned by Asian-American groups and journalists. Watters issued the standard non-apology apology blaming those who were offended for their own pain.

Well, Watters isn’t getting off that easy. Daily Show correspondent Ronnie Chieng saw the piece and had a little something to say about it. He got the righteous rant rolling by responding to a question that Watters asked a Chinatown resident. The question: “Is this the year of the dragon?” Chieng’s reply: “No, it’s the year of “Go F*ck Yourself!” That set the stage for the rest of the segment. Chieng played a few clips from the piece with a look that melded outrage and confusion leading to this comment:

“What the hell was that? How was that on the news? In fact, how was that even on TV? Where the (bleep) did this come from? I mean, everyone’s been wondering who’ll be the target of 2016’s worst racism. I didn’t even know Asians were in the running.”

Chieng chastised Watters for taking advantage of innocent people and making them look foolish for not responding to him. Of course the reason for their silence was that he deliberately harassed people who didn’t speak English. Watters was ridiculing people (mostly seniors) who were unable to defend themselves. So Chieng gave him a taste of his own medicine. In a forum where Watters could not respond, Chieng asked “Hey douchebag, why do you look like a guy who carries around a bag of roofies just in case?” And it just gets worse from there – much worse.

The bigotry that is so commonplace on Fox News in their reporting has also crept into their alleged comedy. And the hate-filled campaign of Donald Trump was hatched and nurtured on the network. Their 99 percent white audience could hardly care less about disparaging others. So expect more of the same sort of prejudice and insults in the future from Fox News. Not to mention their home-brew hate machine, Donald Trump.