Hurricane Trump has been battering the Republican Party for more than a year now. The devastation it leaves behind is all too apparent as GOP candidates evacuate the low lands in a desperate attempt to avoid getting blown away. There is no precedent for the rush to safety that is taking place. Sixteen Republican senators refuse to endorse their party’s nominee for president. And pundits from across the conservative political spectrum – from the right to the far right – are renouncing Donald Trump and his inept campaign. 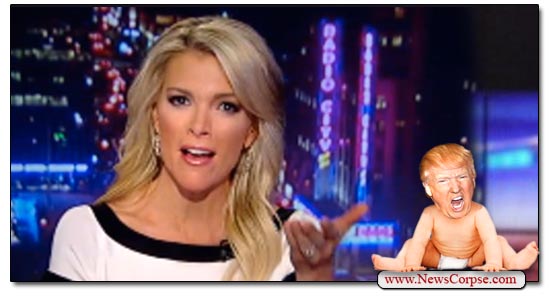 Not satisfied with destroying the Republican Party, Trump can also take pride in demolishing the party’s PR division, Fox News. The BrandIndex survey regularly assesses major American commercial enterprises and ranks them according to their popularity with the public. It also breaks the findings out by political affiliation.

The most recent listing shows a precipitous decline by a former top performer. Fox News has fallen to a negative fifty amongst Republicans. As AdAge reports: “In 2014, Fox News was the brand 10th best-perceived by Republicans […] In 2015, Fox News slipped to No. 15.” For 2016, Fox News fell off a cliff dropping another thirty-five points to 50 below.

The most likely explanation for this involves the same destructive force that is roiling the GOP. Donald Trump was created by Fox and promoted throughout the election season. He received far more airtime and positive coverage than any other candidate. However, at the same time he was merciless in his criticism on those rare occasions when someone on Fox was less than adoring.

No one can forget the bitter feud that developed between Trump and Megyn Kelly after she had the audacity to ask him about some things he actually said. Trump later accused her of being overly harsh with him because of PMS (“Blood coming out of … wherever”). He then backed out of Fox’s broadcast of a GOP primary debate in order to avoid Kelly.

And that was just the beginning. Trump has spewed a steady stream of invective at the network that brought him to life. He said of Kelly that she “is the worst” and has a “terrible show.” He called Karl Rove a “total fool” and “a biased dope.” He said that George Will is a “broken down political pundit” and “boring.” Chris Stirewalt was deemed “one of the dumbest political pundits on television.” Trump laughed off Charles Krauthammer as “a totally overrated clown,” “a loser,” and “a dummy.” And wrapping up the whole network for his disapproval, he tweeted that he was “having a really hard time watching Fox News.” Then he called on his followers to boycott the network.

Funny, but I can’t disagree with much of that. However, now that Trump is getting his ass handed to him by Hillary Clinton, his vitriol is accelerating. His protests that the election is rigged are neatly dovetailed with complaints that the media is rigged. And he doesn’t exclude Fox. Not surprisingly, his legions of glassy-eyed disciples are all too happy to obediently shun Fox News. They now consider the right-wing propagandists to be in cahoots with the liberal establishment. It’s all a big conspiracy.

The result is that the Fox News brand is becoming toxic to a certain segment of those who were once its core audience. The only question is whether they will come back to Fox after Clinton is inaugurated and begins confiscating their guns, forcing them to get gay-married, and have abortions under the new Sharia law.