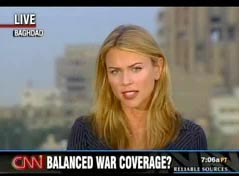 CBS News is fortunate to have one of the most dedicated and responsible reporters in broadcast journalism. But they apparently don’t appreciate it.

Lara Logan has been posting honest and courageous reports from Baghdad since before the fall of Saddam. Her latest, though, has been shuffled off to CBS’ web site without being broadcast on the network. If you see the piece, you might understand why it was treated this way. In addition to contradicting much of the administration’s delusional assertions of success, the story is accompanied by images of the brutal reality of life on the streets of Baghdad. Now she needs our help to get this on the air.

CBS has taken it upon themselves to decide that America “can’t handle the truth.” But as Ms. Logan herself says in a letter to MediaChannel:

“…this is not too gruesome to air, but rather too important to ignore.”

The letter also called for supporters to let CBS know that they are interested in these stories and that they want them to air. Here’s the email for the CBS Evening News.

For a little more background on Lara Logan, click more.

Logan was born in Durban, South Africa. Her journalism career began as a general news reporter for the Daily News and the Sunday Tribune, both located in Durban. She relocated to London and work as a freelance correspondent for several years before taking a position at CBS.

Here are a couple of events that demonstrate her integrity and passion for her work.

CNN Reliable Sources [YouTube]
On this program, Logan was confronted with allegations that she and her colleagues in the field were “carrying the terrorist message” by only reporting the bad news and making it appear that the country was falling apart. Her response?

Later in the program she responded to charges by Laura Ingraham that she and other correspondents were merely, “reporting from hotel balconies about the latest IEDs going off. “ Her response?

“I think it’s outrageous. I mean, Laura Ingraham should come to Iraq and not be talking about what journalists are doing from the comfort of her studio in the United States, the comfort and the safety […] I think it shows an abject lack of respect for any journalist that’s prepared to come to this country and risk their lives.”

CBS Evening News, November 29, 2005
On this program, Logan has a remarkable exchange with anchor Bob Shieffer who kept asking leading questions – but she wouldn’t have any of it.

Schieffer: We want to go now to Baghdad where Lara Logan is standing by. Lara, today Mr. Rumsfeld, the Secretary of Defense, made a point of saying that the road between the airport and Baghdad is now under Iraqi control. I know you were just out on that road. What is the situation there?

Logan: Well, Bob, that simply isn’t true. American forces are in control of the airport road, not Iraqi forces. And Iraqi police battalions set up checkpoints along airport road in April, and they’ve been very effective in helping reduce attacks on airport road, but I confirmed tonight with American officials here in Baghdad, and I certainly saw for myself when I spent several weeks on that road in August and September, that American soldiers are in control. It’s American humvees patrolling 24 hours a day, and it’s American firepower that makes those Iraqi police checkpoints possible on that road.

Schieffer: And the Secretary of Defense made a point of what he called Haifa road, which is one of the most dangerous areas, Haifa Street. He says that’s under Iraqi control now. What can you report on that?

Logan: Well, American forces conducted very significant operations on Haifa street, but it’s widely acknowledged here and has even been reported publicly that a deal was made and that insurgents who were attacking on Haifa street are now using that as a command base and attacking elsewhere in Baghdad, that they made that deal with the Iraqi authorities, and that’s why Haifa street now appears to be under the control of the Iraqi police.

Logan: “It’s quite clear on the ground here that even though the Iraqis are taking more control on a daily basis on the ground, they’re nowhere near taking this over. There are huge questions about who the Iraqi police and who the Iraqi army are loyal to. They’ve been infiltrated by militias. They have no command and control structure that could survive without the Americans. They rely heavily on American armor and American air support, and I think they’re a very long way from that, Bob.

Schieffer: All right, well, thank you very much, Lara.

Indeed, thank you very much, Lara.