The stunning spectacle of President-Elect Donald Trump continuing his midnight tweet tirades is a harbinger of a surreal future. He’s the first American president to sink to such juvenile 140 character trash-talk. 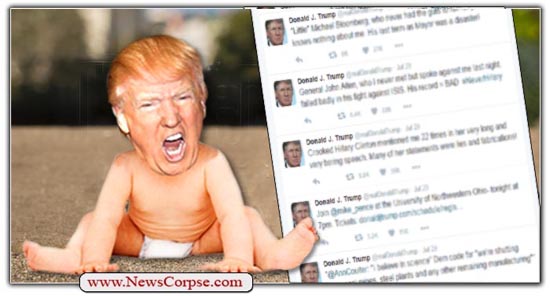 In response to the effort to recount votes in three battleground states, Trump disgorged a stream of ludicrous tweets. They contained both delusional fiction and stark contradiction. He led off with a claim that the recount was a scam that wouldn’t change the election results. But then he flipped to asserting that there were indeed “millions of illegal votes.” That should be justification for a recount. He never bothered to reconcile his disjointed logic.

KEITH: I am hoping that you could point to the evidence of millions of people who Mr. Trump claims voted illegally and also any evidence you have of election fraud that he claimed on Twitter happened in New Hampshire, Virginia and California.

MILLER: You know, one of the things I’d say just, kind of, on the front end that I really do think that it’s been ridiculous that so much oxygen’s been given to the recount effort where there’s absolutely no chance of any election results changing. […]

For some reason, Miller drifted off into Palin-speak. Perhaps she is advising the campaign on how to be incomprehensible in order to avoid tough questions. Then he returned to the topic and gave an answer that defies credibility:

I’d also point out some of the other examples that we had raised during the campaign. Some numbers include the Pew Research study that said approximately 24 million, or one out of every eight, voter registrations in the United States are no longer valid or significantly inaccurate. And in that same Pew Research study, the fact that 2.5 million people have registrations in more than one state.

First of all, the Washington Post study to which Miller referred was from 2014 and had nothing to do with this election. Secondly, it was debunked by fact-checkers and the Washington Post itself. In fact, WaPo added a preface to their own article saying that “the findings were biased and that the author’s data do not provide evidence of non-citizen voting in U.S. elections.”

Similarly, the Pew study (from 2012) had no bearing on 2016 presidential voting. And both studies involved only voter registration. Neither one made any claims with regard to illegal voting or voter fraud. Even the registration issues didn’t indicate any fraud. They were mainly due to voters dying, moving or otherwise not updating their registration status. That includes immigrants who showed up on voter rolls after they became citizens, but who were still identified in other government databases as non-citizens. The studies did not allege that any of these mis-registered people ever improperly voted. Nevertheless, Miller insisted that he had uncovered bona fide examples of election fraud:

So all these are studies and examples of where there have been issues of both voter fraud and illegal immigrants voting. So if this much attention and oxygen’s gonna be given to a completely frivolous, throwaway fund-raising scheme by someone like Jill Stein, then there should be actual substantive looks at the — the overall examples of voter fraud and illegal immigrants voting in recent years. And so that’s — that’s the — the broader message that I think should be taken away here.

No, these are plainly not examples of “voter fraud and illegal immigrants voting.” However, if Miller really believes that they are, he should join Stein’s effort to call for an even more expansive recount of the 2016 election. Recount the whole country. How can he argue that there’s rampant fraud that undermines our democracy, but that we shouldn’t do anything about it? We welcome him to the fight for fair and honest elections. Let’s root out these imaginary ne’er do wells once and for all.

3 thoughts on “SO LIKE TRUMP: Spokesman Can’t Defend Trump’s Lies – So He Lies Even More”