Most Americans don’t need Fox News to inform them that the network is a rabidly partisan, right-wing propaganda machine. However, it’s nice of them to admit it from time to time, and to provide incontrovertible proof.

The latest public confession by Fox came when they posted promotions for the premiere of Tucker Carlson Tonight. Carlson is the Trump-loving, ultra-conservative, knee-jerk GOP mouthpiece tapped to fill Megyn Kelly’s stiletto heels. On the Fox News website they posted ads to draw viewers to the new primetime program under an unusual category heading: Entertainment. 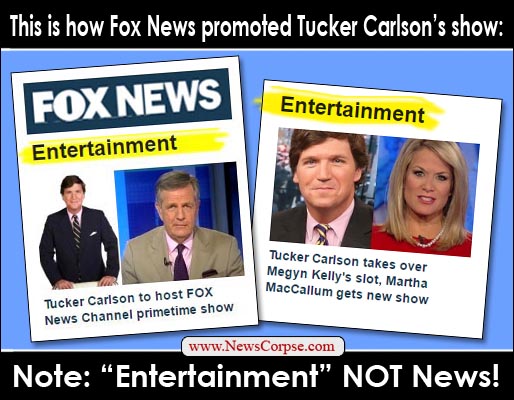 That’s right. Even Fox News doesn’t consider their programs to be news. That has been readily apparent to anyone who has watched the network for more than five minutes. But from Fox’s perspective it has been a key part of their business model from the start. As reported previously by News Corpse:

“Fox News has redefined television journalism by fundamentally transforming it from an information medium to an entertainment medium. They dress up their pseudo-news segments in the same melodramatic packaging that entertainment outlets use: conflict, scandal, mystery, and hyper-charged emotions including hero worship and fear.

This isn’t the first time that Fox has been so candid about their intention to be perceived as an entertainment medium. In a 2015 profile in the Hollywood Reporter the now-disgraced former CEO of Fox made it clear what field of broadcasting he was interested in playing on. He told the trade mag that CNN and MSNBC were not on his radar:

“In fact, Ailes, 74, no longer views those networks as rivals. ‘We’re competing with TNT and USA and ESPN,’ he says.”

So the boss admits that channels that are plainly entertainment and sports are his competition, not other news outlets. There’s a good reason for this. Entertainment routinely trounces news in the ratings. By dressing up the more staid genre of journalism as a sexier breed of programming, Fox hopes to attract larger, more loyal audiences.

Another Fox source confirmed this tactic, ironically in the form of criticism of rival news networks. On Bill O’Reilly’s show, former CBS reporter Bernie Goldberg sought to explain why CNN and MSNBC were losing to Fox. His reasoning was that “Liberal news media violate the cardinal rule of all media. They’re not entertaining.” His point being that Fox had solved that “problem” by abandoning journalistic ethics and playing to their audience’s emotions.

Now, with Fox’s own promotions of a new primetime show, they have finally abandoned any pretense of being a news operation. If a network characterizes itself as entertainment, you might as well take their word for it. Wouldn’t they know? And in the Era of Trump a network populated by faux journalists fits neatly into the latest media trend: Fake News.

One thought on “Fox News Is NOT News: Network’s Own Ads Label Its Programming As ‘Entertainment’”