Donald Trump was interviewed by Bill O’Reilly for a special Super Bowl broadcast. The full interview will be broken up into parts for airing prior to the game, and on consecutive episodes of the The O’Reilly Factor next week. However, there is a teaser that was released Saturday night (video below) and it is shocking, to say the least. 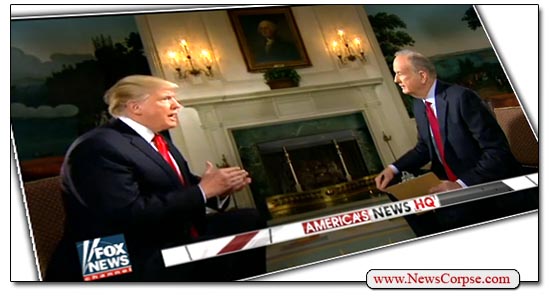 The short segment has O’Reilly asking about Trump’s frequent assertions that he respects Vladimir Putin. Trump concedes that he does because “he’s a leader of his country.” He goes on to say that “it’s better to get along with Russia than not.”

Those are two of the worst reasons to respect a foreign leader ever uttered aloud. The fact that Putin managed to put Russia under his dictatorial boot is not deserving of respect. And getting along with murderous tyrants was never a goal of freedom-loving nations. But the most chilling comment from Trump came in a defense of Putin’s political assassinations. O’Reilly noted that Putin is “a killer.” Trump responded saying:

Let that sink in. Trump is asserting that he has knowledge of American assassins who kill the political opponents of our leaders. Were that true then President Obama might have offed Trump long ago. Yet Trump is placing the U.S. on the same moral footing as the murderous dictator of Russia.

Trump’s remarks go further than any president has ever gone with such allegations. He even goes further than Putin, since the Russian president has never admitted to killing anyone. In fact, he strenuously denies it. But now Trump has put the U.S. on record as committing such heinous acts. And he’s only been in office two weeks.

4 thoughts on “Trump Defends The Murderous Putin By Saying The U.S. Does The Same Thing”