In the two weeks since Donald Trump’s inauguration the nation has risen up in unprecedented numbers. Protests against his regressive agenda have occurred almost continuously with no sign of letting up. His approval rating is the lowest ever recorded for an incoming president, and it has declined since the election. 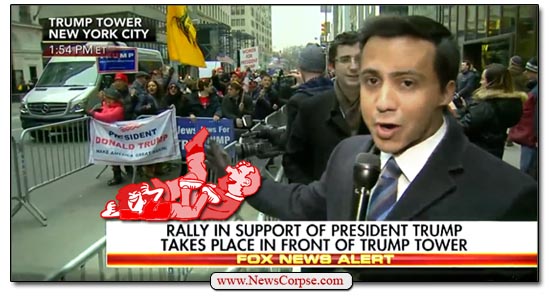 So what’s a right-wing propaganda outlet like Fox News to do when the monster they helped to create is floundering and risks destroying all their hard work? Well, on Super Bowl Sunday they took to the streets themselves (see video below). Specifically, the street in front of Trump Tower. Their crack news team covered a pro-Trump demonstration in New York City complete with “Fox News Alert” banners. Correspondent Brian Llenas was on the scene to report that:

This is the heart of New York City. We’re used to seeing protests – anti-Trump protests – here in in New York City which voted overwhelmingly for Hillary Clinton. But this is a pro-Trump rally. About 50 to 100 people have been here since noon. And they say they’ve really just had it with the disrespect over President Trump. They believe that people should be respecting him, giving him a chance. […] This isn’t a big protest by any means. But it is noteworthy that it is a pro-Trump protest in the heart of New York City.

Noteworthy? Not really. What’s noteworthy is that only 50 people showed up in Trump’s hometown of more than eight million. Maybe Fox News should hold off on the “Alerts” until they get at least 50,000. Although that would still be only one-tenth of what the anti-Trump protests drew. Llenas said the Trumpsters see the anti-Trump protests “ridiculous.” That was just before he observed that some of them were holding pacifiers. How appropriate. They think Trump’s opponents should stop being babies and support their president. But isn’t that the childish thing to do? Just shut your mouth and unquestioningly obey your parents/leaders.

The argument from these StormTrumpers to “give him a chance” is identical to the whining from the White House itself. However, he’s had his chance and has proven to be an abysmal failure. He stocked his cabinet with billionaires and racists. His executive orders run the gamut from banning Muslims to repealing ObamaCare. He’s eased restrictions on toxic waste dumping and canceled protection from corrupt financial advisers. And his incessant tweeting continues to be a source of embarrassment and anti-American bullshit. Giving him any more chances is too big a risk.

For Fox News to go to the expense of covering this pathetic gathering live tells you just how desperate they are to prop up their figurehead. Compare this fawning coverage to what they did during the historic Women’s March two weeks ago. Or to the massive protests at airports across the country last week. In both cases Fox was less urgent and more negative. So be prepared for more of that blatant bias going forward. And expect further coverage of humiliating episodes like the one yesterday in New York.