Since the day that Donald Trump was inaugurated, the American people have flooded the streets and town halls to express their opposition to his agenda. Unprecedented numbers of citizens turned out for the nationwide Women’s March on January 21. A week later, more protesters showed up spontaneously at airports to oppose Trump’s Muslim ban. Now town halls are being inundated by angry voters who won’t stand for Trump’s efforts to gut ObamaCare. 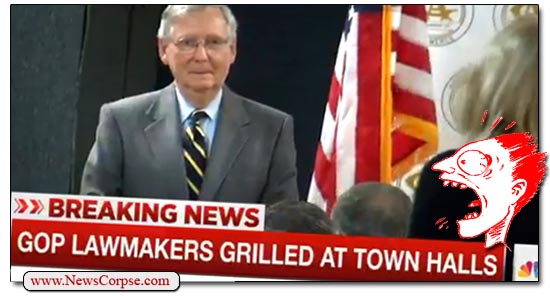 These protests are having a profound effect on the Republican Party. Nervous GOP representatives in Washington, and across the nation, are running scared – literally. Many are avoiding their own constituents meetings for fear of encountering their wrath. And the ones that are going are being greeted by passionate advocates for progressive policies and values.

For those who are skeptical that these tactics are effective, set aside your worries. There is abundant evidence that they are working better than anyone anticipated. And the best proof of that comes from Republicans themselves. Take for instance the remarks by former GOP senator Jim DeMint. He is currently the president of the ultra-conservative Heritage Foundation. Tuesday night he was interviewed by Greta Van Susteren on MSNBC (video below). His intent was to vent his displeasure with citizens exercising their First Amendment rights. But he ended up validating the efforts of the citizens he hoped to discredit:

“It’s not really like the Tea Party. I was going through this document today, Indivisible. These folks are very well financed. Very well organized. They’re being bused around to go to these different town halls to disrupt them.”

First of all, he’s partially correct about the Tea Party. It was quite different in that it was bankrolled by the billionaire Koch brothers. The Indivisible Movement is a grassroots campaign whose partners are social activist organizations, not multinational corporations. However, DeMint’s assertion that protesters are being “bused around” is delusional. They would have to have thousands of buses motoring across the whole country at impossible speeds. But DeMint wasn’t finished:

“So it’s gonna be difficult for congressmen to go out and defend their positions. Because these folks who are coming are not coming to contribute. They’re coming to disrupt. So it’s an organized effort to make it hard for Trump and Republican congress to be successful.”

DeMint is admitting that the GOP’s position is difficult to defend. No kidding. Their platform calls for throwing twenty million people off of their health insurance plans. It proposes tax reforms that will shift the burden from the rich to the middle-class and poor. They are pushing bigoted immigration schemes that will ban Muslims and deport Latinos. And DeMint wonders why that might be difficult to defend? But here’s the best part:

“Hopefully they [Republicans] will continue to plow through. Although I’m concerned that all of this push-back has delayed the repeal of ObamaCare, and certainly other agenda items that need to be taken up.”

That’s right. It’s working. Keep it up. It is highly unusual for a right-wing political operative to concede that his opponents are winning. This admission ought to encourage every progressive to redouble their efforts to prevent the Trump agenda from being implemented. These actions are also being felt all the way up to the White House. They’re rolling out their talking points intended to portray the protests as “fake news.” Press secretary Sean Spicer (Fibby Spice) laments that “There is a bit of professional protester, manufactured base in there.” And Trump himself tweeted this:

The so-called angry crowds in home districts of some Republicans are actually, in numerous cases, planned out by liberal activists. Sad!

We previously were warned about “so-called judges,” and now we have “so-called angry crowds.” Apparently our so-called President is living in a so-called reality where anything he doesn’t like is fake. SAD! It’s not surprising that he’s baffled by citizens “planning” their activities, rather than behaving erratically the way he does. Even worse, in a recent press conference Trump made it clear that he is not the president of all the people:

“We’ve begun preparing to repeal and replace Obamacare. Obamacare is a disaster, folks. It’s a disaster. You can say, oh, Obamacare — I mean, they fill up our alleys with people that you wonder how they get there, but they’re not the Republican people that our representatives are representing.”

Setting aside the odd reference to “alleys,” Trump just confessed that he’s only interested in what Republicans have to say. He continues to prove that he’s a divisive, partisan politician with no interest in having a productive dialog. The extremists in Trump’s administration are determined to steamroll their agenda of hate and elitism through a rubber-stamp congress. Unfortunately for them, the American people do not seem willing to allow it. And if we keep the pressure on, we can stop them in their tracks and replace them in 2018. Forward.