Former Attorney General Loretta Lynch broke many barriers during her tenure as head of the Justice Department. Not the least of which was being the first African American woman to hold the position. She has been a committed advocate of civil rights for decades. And she has always supported peaceful, legal efforts to advance the cause. 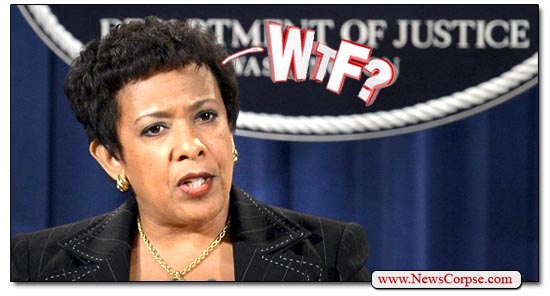 That makes the recent headlines in the right-wing media all the more troubling. Lynch recorded a video message (posted below) upon leaving the Justice Department when President Obama’s term as president expired. It is an inspiring appeal to all Americans to continue the struggle for equal justice under the law. The brief statement serves as a reminder that the fight for equality has “never been easy.” Here are her remarks in full:

“We have always had to work to move this country forward to achieve the great ideals of our founding fathers. And it has been people, individuals, who have banded together. Ordinary people who simply saw what needed to be done and came together and supported those ideals who have made the difference.”

“They’ve marched, they’ve bled and yes, some of them died. This is hard. Every good thing is. We have done this before. We can do this again.”

It seems hard to believe that anyone could find fault in that positive message that exalts American values. But conservative bigots and their media outlets would not be deterred from doing just that.

The ultra-rightist, conspiracy theory website, WorldNetDaily, took the lead with an article that heinously misrepresented Lynch. They maliciously turned her words into a call for blood and death. WND clipped the part where Lynch honored those who sacrificed so much to bring about equality and gave it a new and hateful meaning. They headlined their story “Loretta Lynch: Need more marching, blood, death on streets.”

Obviously Lynch was not advocating for more blood and death. That’s an interpretation that can only be made by a blindly partisan and deliberately dishonest bigot. She was saluting heroes from the past who advanced the cause of liberty. People like Rev. Dr. Martin Luther King, whose mission was always one of peaceful protest. The violence came from the opponents of equal rights for all.

After WND published their hit piece it circulated throughout the right-wing echo chamber. Most prominently, it was featured on the Fox News community website (and lie factory), Fox Nation, with the same headline. And it didn’t stop there. The wingnut network embraced this slanderous theme. It was also published on a variety of right-wing sites including Alex Jones’ Infowars, the Gateway Pundit, and the Drudge Report.

This is how the alt-right, white supremacists distribute their hate-speech. And it isn’t a coincidence that all of these outlets are on Donald Trump’s favorites list. His presidency has emboldened the worst elements of our national character. When Klan groups openly celebrate the election of Trump, someone they regard as one of their own, it should set off alarms. But Trump’s tepid response to his most fervent and vile followers continues to serve as encouragement to the racist right. And the smears against Lynch are just the latest examples of how committed bigots will distort reality to further their mission of hate.