There have been numerous polls that show Donald Trump sinking to historic lows in approval. He currently resides at a pitiful 43 percent. That puts him at the bottom of the past nine presidents (going back more than sixty years) at this point in their terms. And that makes him the most unpopular new president in as long as this poll has been done. 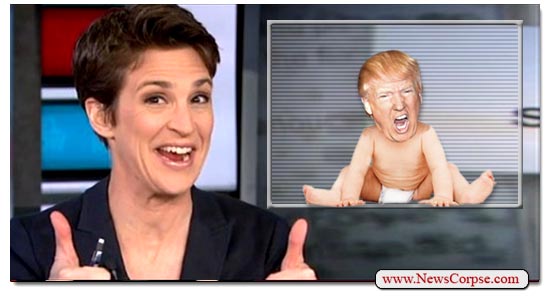 Likewise, majorities of the public are generally not in favor of his policies. He is trailing on the issues he has pushed the hardest for. Voters oppose him on ObamaCare, the border wall, and immigration. The media that he hates so fiercely is held in higher esteem than he is. And half of the electorate is already in favor of impeaching him. Can it get any worse than this?

Well, another measure of popularity is the ratings of television programs that feature news about politics. On that scale Trump is also in trouble. While Fox News remains the top rated cable news network, it is growing at a slower rate than its competitors. And one program particularly stands out. The Rachel Maddow Show on MSNBC is reaching new heights since election day. Maddow was recently featured in an interview with The Wrap who noted that:

“MSNBC’s ‘The Rachel Maddow Show’ has been on a roll, posting her best ratings month ever in February and nearly doubling her viewership. Her secret is simple. Maddow said she covers President Donald Trump’s White House in a very old-fashioned Hollywood way.

“‘We developed sort of an informal, internal mantra… which is that we basically cover them as if they are a silent movie,’ Maddow told TheWrap. ‘I stopped covering the Twitter feed and we started covering only what they do rather than what they say.’

“It’s working. In February, Maddow racked up MSNBC’s largest total viewer audience ever in the 9 p.m. ET timeslot and the best performance among the key news demo of adults age 25-54 since November 2012. After the February victory, Maddow has now beaten CNN’s regularly scheduled programming for 45 straight months.”

This sort of performance spike does not happen in a vacuum. People are gravitating to news that is informative and entertaining. There is clearly an audience that isn’t interested in Fox’s Pravda-like impression of state-run propaganda. Nor are they drawn to the phony “balance” that CNN aims for.

The television audience is reflecting the electorate by rewarding programming that takes on the flagrant lies of a delusional administration. Throughout the television schedule there is evidence of a Trump effect. Stephen Colbert has jumped into the late-night top spot due to his renewed focus on Trump. Saturday Night Live is hitting heights they haven’t seen in years. Sure, there may be some confirmation bias in this, but even that is instructive. There is obviously a significant number of people looking for confirmation of reality. And that’s something they aren’t getting from Trump & Company.