As President of the United States, Donald Trump continues to ignore the resources available to him in that position. There’s a vast intelligence bureaucracy as well as agencies that collect data on virtually anything he might need to know. Nevertheless, he still prefers to rely on dubious sources like talk radio and cable news. 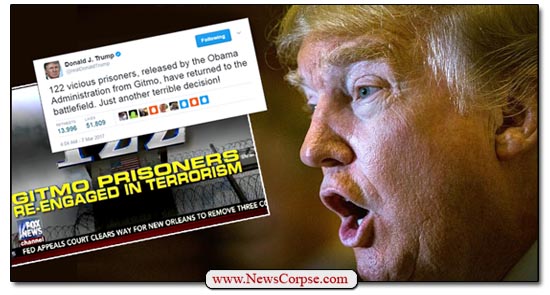 Trump’s favorite goto source for iffy information is, of course, Fox News. He has demonstrated a pattern of posting tweets shortly after seeing something on Fox. It is never independently verified, and is often blatantly false.

The latest example of this aberrant behavior occurred Tuesday morning. As is his routine, Trump awoke early, grabbed the remote, and turned on Fox & Friends. The “curvy couch” potatoes were discussing a news story about a former Guantanamo Bay detainee who was killed by an airstrike in Yemen. Then they went on to point out that “at least 122 former Gitmo detainees have re-engaged in terrorism.”

In this rare incident, the Foxies actually got the story right. A former Gitmo detainee was killed and there were 122 others who are believed to have returned to the battlefield. So far, so good. Now let’s see what Trump has to say about what he just saw on Fox:

122 vicious prisoners, released by the Obama Administration from Gitmo, have returned to the battlefield. Just another terrible decision!

Notice the editorial addition that Trump added to the story: “released by the Obama Administration.” That is demonstrably false. The office of the Director of National Intelligence, which now reports to Trump, tells a different story. Of the 122 former detainees who have re=engaged, 113 were released during the administration of George W. Bush. Only nine were released during the Obama administration. The total numbers of those released were 532 for Bush (21.2% re-engaged), and 161 for Obama (5.6% re-engaged).

So the knee-jerk rightists who blame President Obama for every evil on the planet are wrong again. Obama actually released far fewer detainees, and a much smaller percentage of them resumed fighting. Trump’s criticism of Obama’s “terrible decision” is just another in a long line of falsehoods. And for some reason, Trump is still determined to ignore his own intelligence experts. With all of the resources at the FBI, CIA, NSA, DNI, Pentagon, etc., Trump still leans on Fox News. Then he adds his own totally made up nonsense.

This is an administration that is pathologically obsessed with lying. The media should remind everyone of this each time they cover anything that Trump says. He is simply too unreliable to take seriously. How can the press pretend otherwise? And how can anyone in Congress have any confidence in his words? Worst of all, how can any other country believe the American president when he lies so brazenly to his own people?