Fox News is always on the lookout for the sort of breaking news that impacts the lives of the American people. And they aren’t afraid to spend hundreds of hours on Benghazi myths, Kenyan birth certificates, or imaginary voter fraud. The diligent sleuths at Fox News work tirelessly to inform their viewers of pertinent issues. After all, these are the heroes who previously broke the “Boob Bombs” conspiracy wide open, and disclosed the existence of “Jihad Monkeys.” 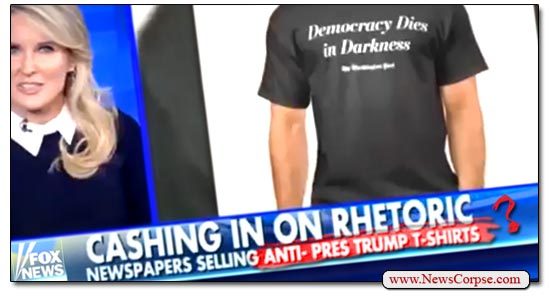 This week Fox News has landed another incredible scoop that is certain to roil the runways of Washington. The political fashion establishment will never be the same. On an episode of Fox and Friends First, co-host Heather Childers unleashed a sure-fire Pulitzer winning expose. With no fear of the potential consequences, she launched into into this harrowing story (video below):

“Media bias on full display! Newspapers now cashing in on T-shirts splashed with anti-President Trump rhetoric. The Washington Post offering this shirt which says ‘Democracy Dies in Darkness.’ The LA Times selling shirts that say ‘Journalism matters.’ And the Chicago Tribune’s featured the line ‘Speaking truth to power since 1947.’ The shirts being sold for around twenty bucks.

[Editor’s note: Links added in case you want to witness this atrocity for yourself – or purchase one]

Where else but on Fox News could you learn that t-shirts extolling the virtues of a free press were actually attacks on President Donald Trump? Only Fox’s keen eye would notice the anti-Trump message even though there is nothing that even alludes to him. The mere suggestion that journalism might be an honorable profession is evidence of Trump hate. Recall that Trump famously declared that the media is “the enemy of the American people.” He has lashed out reporters as “liars,” “sleazy,” and “horrible people.” And when he isn’t throwing them out of his rallies and press briefings, he’s branding them as “fake news.”

Now the curtain has been pulled aside and everyone can see that any expression of support for the First Amendment is a backhanded slap at the President. So don’t be fooled by hateful slogans like “Journalism matters.” It doesn’t. It’s just a malicious tool used by traitors to undermine the Trump presidency. Thank goodness Fox News is here to reveal these truths. And for anyone who is confused as to why none of this reflects on what Fox News does, rest easy. That’s a red herring because, as any media expert will tell you, Fox News has never engaged in journalism.