The Republican Party has long been a fierce opponent of any efforts to mitigate climate change. Their opposition stands in stark contrast to the near unanimous consensus in the scientific community. But that hasn’t stopped conservative leaders from twisting their heads firmly into the sand on behalf of their fossil fuel benefactors. 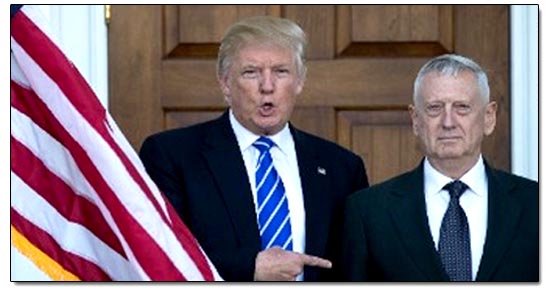 Donald Trump is among those who refuse to accept the reality of climate change. He has called it a hoax perpetrated by China. He installed an Environmental Protection Agency (EPA) director, Scott Pruitt, who doesn’t think that carbon dioxide is a driver of global warming. And much of his domestic policy is focused on advancing the financial prospects of oil and coal producers. But there are some new fissures beginning to show in the administration. The Huffington Post is reporting that:

“Secretary of Defense James Mattis has asserted that climate change is real, and a threat to American interests abroad and the Pentagon’s assets everywhere, a position that appears at odds with the views of the president who appointed him and many in the administration in which he serves.”

Indeed, the new Pentagon chief is directly disavowing the position of the President. He went on to stress that “this is a real-time issue, not some distant what-if.” According to “Mad Dog” Mattis “Climate change is impacting stability in areas of the world where our troops are operating today.”

This is not a particularly new opinion within the walls of the Pentagon. The military has been crystal clear for years about the very real consequences of a world where water and arable land become scarce, and nations erupt into chaos and war. And it isn’t just liberal tree-huggers who have signaled the alarm on climate change. For instance, the Rolling Stone documented this notorious right-wing influencer:

Rumsfeld is not alone either. Six of the past Secretaries of Defense (Mattis, Ash Carter, Chuck Hagel, Leon Panetta, Robert Gates, and Rumsfeld) all subscribed to the policy that climate change is one of America’s top strategic risks. And four of the six are Republicans.

Trump has variously said that he would rely on his generals, but also that he knows more than they do. It’s too soon to say which side he’ll come down on with regard to Gen. Mattis’ remarks. Trump is well known for not backing off of any position he takes, no matter how flawed. But if he insists on opposing the accumulated wisdom of six defense secretaries, and hundreds of climate scientists, he will only be digging himself and the Earth’s inhabitants a deeper grave.