The record of Donald Trump’s pathological aversion to the truth is well documented (see the Trump Bullshitopedia). With every day that goes by he introduces a new, self-serving lie. His purpose is generally to vindicate himself from some embarrassing display of ignorance or policy stumble. Either that or to distract from more serious misconduct such as his unsavory connections to Russia, or financial conflicts. 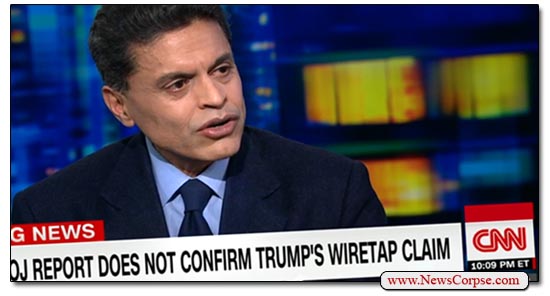 The media is usually too timid to accurately describe Trump’s falsehoods as lies. Even when the evidence is overwhelming. However, they have been showing some improvement in that area. Friday on CNN’s “Tonight with Don Lemon,” guest Fareed Zakaria launched into a righteous condemnation of Trump, complete with an appropriate profanity:

“I think the president is somewhat indifferent to things that are true or false. He has spent his whole life bullshitting. He has succeeded by bullshitting. He has gotten the presidency by bullshitting. It’s very hard to tell somebody at that point that bullshit doesn’t work, because look at the results, right? But that’s what he does. He sees something, he doesn’t particularly care if it’s true or not, he just puts it out there. And then he puts something else out. And notice again what he did at the press conference. When pushed on it, he doesn’t take responsibility. ‘I wasn’t saying that, I was just quoting somebody else.'”

.@FareedZakaria: The President is indifferent to things that are true or false. He has spent his whole life BSing. https://t.co/B1tfSDs8EA

Indeed. At the joint press conference with German Chancellor Angela Merkel, Trump was confronted with his preposterous assertion that Obama had wiretapped his phones. His press secretary, Sean Spicer, cited a Fox News report that Obama had been aided by British intelligence as confirmation. It didn’t take long for that story to fall apart, with offended British authorities saying it was “ridiculous.” So Trump backpedaled by trying to blame it all on Fox News.

Zakaria’s larger point, however, is one that is too often overlooked. For most of his adult life Donald Trump has bullshitted his way to success. Or used bullshit to explain away his many failures. He did this with his real estate ventures, his phony university, his retail products, and even his marriages and affairs. He has never demonstrated the honesty or integrity that ought to be associated with leadership. His profile was always one of a huckster or con man, bragging about imaginary achievements. It is refreshing to see someone in the media who isn’t afraid to tell it like it is.

This was not the first time that Zakaria observed Trump’s predilection for prevarication. Last fall he devoted nearly five minutes on his own program to a segment titled “Trump Is A B.S. Artist.” Zakaria references an academic essay, “On Bullshit,” and draws parallels between that and Trump’s public behavior. It’s a thing of beauty. And here is that segment for your viewing pleasure: