From the beginning of Donald Trump’s candidacy he was fawned over by adoring anchors and pundits on Fox News. They rushed to defend him at every turn and praised whatever lame-brained or hateful scheme he would propose. The network turned over so many hours of valuable airtime they should have been designated as campaign contributions. He had a long-running regular segment on Fox and Friends called “Mondays with Trump.” And Bill O’Reilly and Sean Hannity kept the door open for him to appear, or call in, at his convenience. 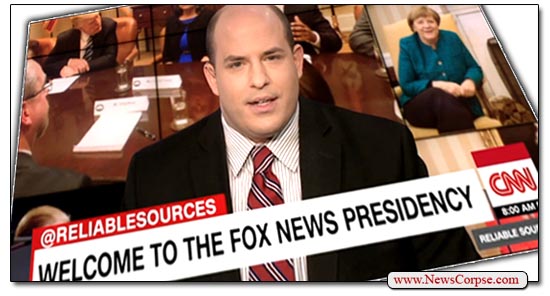 Since becoming president, Trump has made a habit of harvesting topics from his obsessive viewing of Fox. There have been numerous instances of him tweeting about something that had aired shortly before on his favorite network. He clearly relies more on conspiracy theories from Fox than he does on the intelligence agencies that work for him. It’s a perverse and frightening state of affairs.

Sunday, on CNN’s Reliable Sources, host Brian Stelter delivered a commentary about this titled “Welcome to the Fox News Presidency.” It was a long overdue examination of the incestuous relationship between Trump and Fox. Stelter began by noting that:

“Five of his seven sit-down TV interviews since taking office have been with Fox News. Trump watches Fox. He tweets about Fox. He uses Fox graphics to advance his agenda. He’s hired Fox talking heads. He promotes Fox as fair while denigrating its rivals as fake. All of this amounts to a Fox News presidency. What I mean by that is a presidency shaped by Fox News in all sorts of ways, big and small.”

Indeed. Trump has exhibited an abject fear of taking questions from any news organization other than his pals at Fox. His assaults on the free press are frequent and biting (as well as childish and false). But his compliments for Fox are effusive and unrestrained. Meanwhile, anyone critical of Trump often finds themselves locked out. Just ask Megyn Kelly and George Will. Independent thought is not a value favored by Fox executives. Perhaps Shepard Smith should watch his back.

In addition to the Trumpification of Fox News, there has been a simultaneous Foxification of the Trump administration. Former Foxies on the White House payroll include K.T. McFarland, Ben Carson, Sebastion Gorka, Heather Nauert, and Jonathan Wachtel. Fox’s Monica Crowley was also hired by Trump, but she was forced to resign after the rampant plagiarism in her book was revealed. This is an unprecedented migration of media hacks to political flacks.

Stelter’s commentary is an encouraging, albeit late, beginning for the media honestly characterizing the formation of Trump’s Ministry of Propaganda. More of this reporting will be necessary as Trump continues to steamroll the First Amendment and blur the lines between media and politics.

Trump recently told Fox’s Tucker Carlson that “When I have close to 100 million people watching me on [social media…] I have my own form of media.” Someone should tell him that another term for a president with his “own form of media” is “state-run media.” The press is not supposed to be a tool for the president’s communications. That’s how it’s done in dictatorships, but not in America. Maybe Trump has been consulting too much with his BFF, Vladimir Putin.

3 thoughts on “FINALLY: CNN Calls Out Trump For ‘A Presidency Shaped By Fox News’”