On Monday the House Intelligence Committee held a hearing to investigate Donald Trump’s campaign and its connections to Russia. Witnesses included FBI Director James Comey and Adm. Mike Rogers, Director of the National Security Agency. The testimony was conclusive with regard to Russia’s efforts to interfere with the 2016 presidential election. And their motives were plainly to help Trump and hurt Hillary Clinton. Furthermore, Comey confirmed that he knew of no evidence that the Obama administration had wiretapped Trump’s phones. On that matter he was speaking for the Department of Justice as well. So Trump’s reckless tweets asserting that President Obama was guilty of that felony were exposed as lies. 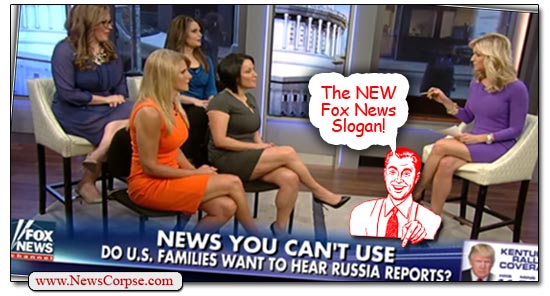 Many of the details of Russia’s election tampering were not provided due to the sensitive nature of the information. Comey had to be careful not to reveal classified data or compromise the conduct of an ongoing investigation. But there was no question that Trump’s campaign is the subject of an investigation and the consequences remain dire.

In light of that, Fox News sprung to action in order to protect Trump from any negative public relations fallout. His pals at Fox and Friends assembled a panel of what they called “Security Moms” (video below). In fact it was a group of pre-selected pro-Trump mouthpieces who would defend their hero under any circumstances. Co-host Ainsley Earhardt opened the segment saying:

“Even the mainstream media is admitting that there is probably no Russian connection to the Trump White House. So why can’t they stop talking about it? Is this really what American families want to know? Who better to ask than our panel of moms?”

First of all, Earhardt’s assertion that there is “no Russian connection to the Trump White House” was pulled straight out her assumptions file. There are numerous connections, as is documented by the research of Rep. Eric Salwell. His charts reveal a disturbing web of Trump/Russian connectivity. And secondly, Earhardt’s objection to the media’s focus on this issue belies her determination to squelch it.

Earhardt’s first question was a not so fair and balanced “Why is the mainstream media harping on this?” The answers from her panel of Trump Moms were typical rationalizations of his erratic behavior. They ran the gamut of wingnut allegations from “fake news” to delegitimizing the President. Earhardt also asked if any of the panel was concerned that Trump or his campaign colluded with Russia. They all immediately said “No.” By the end of the segment Earhardt and her support group all agreed that we should “move on” from the Russia story.

Clearly this was a deliberately biased group of women assembled to shield the President from criticism. It’s something Fox does on a regular basis. How else could they all be unconcerned about an American president colluding with a hostile foreign country? They expressed an interest in diverting to other issues such as immigration. But even in those comments they parroted the Trump agenda fomenting fear of “illegals” and terrorists.

Fox News displayed a graphic during the segment that read “NEWS YOU CAN’T USE. Do U.S. Families Want To Hear Russia Reports?” The conclusion expressed by the Trump Moms was a unanimous “No.” These Foxies must not be paying very close attention to Fox News. The network recently released a poll that specifically addressed these issues. The poll asked:

Do you think there should be a Congressional investigation into:

So about two-thirds of voters think there should be investigations into Russia’s election tampering and Trump’s potential complicity in it. That’s according to Fox’s own poll. Yet Fox and Friends puts four women on the air who all take the completely opposite view. If that isn’t an attempt at manipulation and propaganda, then nothing is. It’s just further proof that Fox serves as the PR division of the Trump administration.

Finally, we know that Trump pays attention to Fox’s polls because this same Monday morning he tweeted:

Just heard Fake News CNN is doing polls again despite the fact that their election polls were a WAY OFF disaster. Much higher ratings at Fox

Actually, the poll he was referencing was not from CNN, it was from Gallup. It shows him near the lowest point in his already record-breaking low presidency with only 39 percent approval. Also, CNN’s election polls were pretty close to the final result. They had Clinton leading Trump by about five points. She finished three points ahead. Trump’s observation that Fox’s poll was more favorable is true. However, it also had him in a decidedly negative position with 43 percent approving and 51 percent disapproving. Apparently in Trump’s world that’s good news. At least Fox got a new slogan that actually makes sense: News You Can’t Use.