The Fox News afternoon program The Five is a preposterous hour of right-wing blather. The co-hosts consist of four arch-conservatives and one lonely and abused, alleged liberal. They chatter aimlessly, generally agreeing on the awesomeness of Donald Trump and the manifest evil of his Democratic critics. 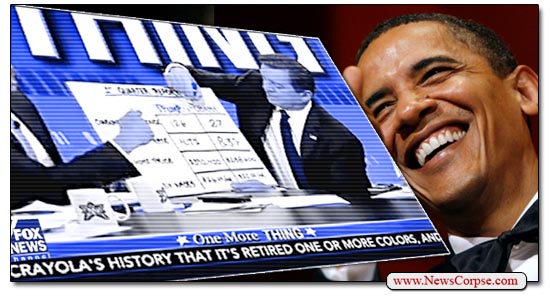 On Friday’s episode, co-host Eric Bolling once again earned his title as “Stupidest Man on TV.” Introducing his “scorecard” comparing the nascent Trump administration to that of President Obama’s, Bolling pulled out his white board. It contained a few economics metrics, but ignored the flood of scandals and legal potholes littering Trump’s brief tenure. (See the video below).

However, even that narrow examination of the two presidents was botched miserably by Bolling. In fact, it was so ridiculous that even his conservative colleagues burst out into spontaneous laughter. He began the segment innocently enough saying:

“The first quarter in the books yesterday or today, right? Last day of the quarter. So we did a little bit of a scorecard going – comparing the Trump administration to Obama one quarter in.”

The numbers Bolling presented for consumer confidence, unemployment, etc., were taken from the first quarter for both presidents. Consequently, Obama’s first quarter results looked horrible, while Trump’s were stellar. Of course, any twelve year old would know that those numbers represent the economy of the previous president. None of the policies of a new chief executive could have been implemented in that time. So Bolling was actually showing the numbers for Bush’s last days and comparing them to the success of the Obama years.

The obviously partisan spin was mocked furiously by Bolling’s co-hosts. Dana Perino called it “unfair.” Greg Gutfeld noted honestly that the positive results were “essentially all from Obama.” Juan Williams suggested that Bolling show the approval ratings for Obama (62%) and Trump (35%) on his board. And all of them laughed mercilessly at Bolling’s lame attempt to credit Trump with Obama’s accomplishments.

That’s how far a devoted Trump sycophant will go to deceive the naive in his audience. Sean Hannity does it everyday. Bill O’Reilly sells the same snake oil to his deluded viewers. But on this occasion the absurdity was too much for even Fox’s right-wing mouthpieces to endure without fits of hysterics. Through it all, Bolling himself never seemed to realize that he was the object of ridicule. That’s why he’s such a perfect shill for Trump. Neither have much of a grip on reality.