Another morning, another tweetstorm. On Monday Donald Trump took time away from his golf game to unleash a new round of deranged outbursts on Twitter. The president, whose attention span barely reaches 140 characters, continues venting via tweet rather than doing any actual work. 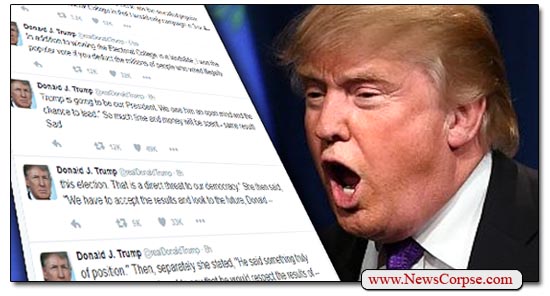 Trump’s latest social media spew included a shout out to Fox News, which must be a contractual obligation. Another tweet featured a routine diversionary tactic to hype a phony surveillance story as a distraction from the Russia scandal. But perhaps the most comical tweet of the morning was this:

Did Hillary Clinton ever apologize for receiving the answers to the debate? Just asking!

The first laughably absurd observation about this drivel is that Hillary Clinton never received any “answers” to the debate. What Trump is ineptly attempting to reference is the allegation that Donna Brazile passed along some topics that would be discussed by audience members in a debate with Bernie Sanders. Of course, topics are not answers, which Clinton would have had to come up with herself. That’s a mental process with which Trump is obviously unfamiliar.

More importantly, Trump’s passive aggressive-request for an apology stretches the limits of hypocrisy. After all, did he ever apologize for calling Clinton crooked? Or for five years of birtherism, insisting that President Obama was Kenyan? Or for asking Russia to illegally hack Clinton’s emails? And even worse, colluding with Russia to steal the election? Did he ever apologize for mocking a disabled reporter? Or for maligning Sen. McCain’s service in Vietnam? Or for ripping off donations intended for veterans? And what about apologizing to Mexican immigrants for saying they are criminals and rapists? Has he ever apologized for insulting Carly Fiorina’s face? Or saying that small-chested women could never be a ten? Or for grabbing women by the pussy?

This list only brushes the tip of Trump’s offensive behaviors. And it doesn’t even begin to address the offensive policies he has proposed. For instance, his now failed effort to repeal ObamaCare, which would have thrown millions off of their health insurance plans. Or his inane border wall. Or tax reform that transfers America’s wealth from the poor and middle-class to the wealthy. Then there’s his determination to defund Planned Parenthood. And his phantom strategy to defeat ISIS, much of which constitutes war crimes.

Finally, will he ever apologize for demonizing the Constitution’s guarantee of a free press? For his relentless smears of reporters as liars, sleazy, and horrible people? For revoking press credentials of media critics? Or for proposing to alter libel laws so he can file frivolous lawsuits? Or for calling the media “the enemy of the people,” echoing the rhetoric of fascist regimes? Trump’s use of the phrase “fake news” is a bastardization of the term. In his ignorance, he applies it to any reporting that he doesn’t like.

Trump has called his reliance on Twitter his “own form of media.” Another term for that when managed by the head of state is “state-run media.” The press is not supposed to be a mouthpiece for the president. That may be how it’s done in the dictatorship of his pal Vladimir Putin, but not in America. And most of the country is still wondering when Trump will stop his idiotic tweeting and start pretending he can govern. Or maybe they’re just glad that he’s so distracted by his swollen ego that he isn’t causing more harm by actually trying to do his job. That would only give more for which to apologize.