BREAKING: 21st Century Fox just released a statement on Bill O’Reilly confirming that he will not be returning to the network:

“After a thorough and careful review of the allegations, the Company and Bill O’Reilly have agreed that Bill O’Reilly will not be returning to the Fox News Channel.”

After twenty-one years that is the extent of the separation announcement. This breaking news draws to a conclusion a long-running drama at Fox. 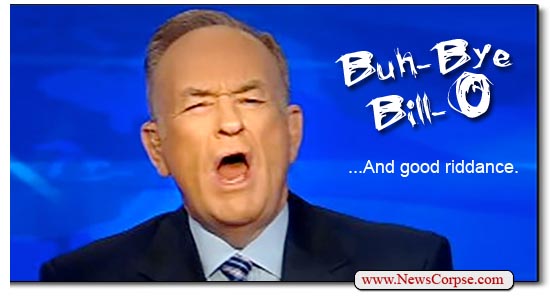 Three weeks ago, the New York Times published a story that upended Bill O’Reilly’s career. It revealed attempts by the Fox News star and the network to cover up allegations of his sexual misconduct. Several women who had not previously been disclosed were identified as having been paid large settlements for their silence.

Since then The O’Reilly Factor has seen a mass exodus of advertisers. More than eighty have publicly stated that they will not permit their ads to be aired on his program. As a result, the board of directors at Fox News have put an end to the program.

Even before this announcement reports increasingly leaked out that O’Reilly was already doomed. The Wall Street Journal (also part of Rupert Murdoch’s media empire) reported that:

“Initially, Fox News and parent company 21st Century Fox stood by their highly-rated host … However, as advertisers fled his show, debate inside company ensued over the pros and cons of keeping Mr. O’Reilly on the air.”

Then Gabriel Sherman of New York Magazine weighed in. He has been covering the inside stories on Fox News for several years. He has reliable sources and published the definitive, unauthorized biography of the network’s former CEO Roger Ailes: The Loudest Voice in the Room. His latest article suggested correctly that “Fox News Has Decided Bill O’Reilly Has to Go.”

“The Murdochs have decided Bill O’Reilly’s 21-year run at Fox News will come to an end. According to sources briefed on the discussions, network executives are preparing to announce O’Reilly’s departure before he returns from an Italian vacation on April 24. Now the big questions are how the exit will look and who will replace him.”

Fox News will have to handle O’Reilly’s departure carefully. The network has already lost several high profile figures including disgraced ex-CEO Roger Ailes. On air personalities Megyn Kelly, Greta Van Susteren, and Gretchen Carlson have also departed recently. But O’Reilly is the highest rated host on cable news with a loyal following. Will his fans react to his termination by turning off Fox News? Or will they behave like good cultists and obediently tune in to his replacement?

Speaking of replacements, the names most often mentioned include Eric Bolling, Dana Perino, Jesse Watters, and Martha MacCallum. Tucker Carlson is also in the mix to move his current show into O’Reilly’s time period. None of these prospects have the fame or fan base that O’Reilly has. But the advantage for Fox is that their glassy-eyed viewers are glued to the network and will likely watch whatever comes on.

Fox would be wise to give extra consideration to the women on that list. Given the salacious circumstances that drove out Ailes and (perhaps) O’Reilly, it might serve as a form of redemption. But Fox also doesn’t have any minority hosts in prime time, and never has. However, none of their current staffers (Juan Williams, Harris Faulkner, Geraldo Rivera) appear to be under consideration.

The future for Fox News is not especially bright, but neither is it particularly dark. They have suffered some significant setbacks recently, but have a friend in high places. In that regard, Donald Trump’s support for Bill O’Reilly obviously didn’t have any effect. But when the President of the United States is calling in to Fox and Friends, and advertising the network on his Twitter feed, the news isn’t all bad. Well, except for the actual “news” as it’s practiced by Fox.

5 thoughts on “Bill O’Reilly FIRED By Fox News: But the Lies and Disinformation Will Continue”