The 100 day mark is rapidly approaching in Donald Trump’s already failed presidency. And as it nears he is becoming more desperate to produce an achievement he can brag about. Ironically, he now pretends that the 100 day milestone is a “ridiculous standard.” Never mind that he cited it himself repeatedly. 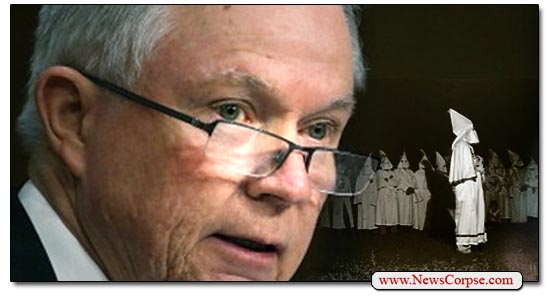 At the top of his list is his promise to build a wall along the southern U.S. border and make Mexico pay for it. It’s clear that Mexico has no intention of shelling out for such a ludicrous project. Consequently, Trump and his team have been flailing wildly to come up with an alternative payment scheme they can spin as dinging Mexico. The latest was proposed by Attorney General Jeff Sessions Sunday on ABC’s This Week:

“We’re going to get paid for it one way or the other. I know there’s $4 billion a year in excess payments, according to the Department of the Treasury’s own inspector general several years ago, that are going to payments to people – tax credits that they shouldn’t get. Now, these are mostly Mexicans. And those kind of things add up – $4 billion a year for 10 years is $40 billion. There are a lot of ways we can find money to help pay for this.”

As pointed out in Politico, Sessions was likely referring to a Treasury Department report published in 2011. It found that there were people who are not authorized to work in the U.S. but had received $4.2 billion in refundable tax credits. However, the report didn’t mention Mexicans or any other nationalities. That was an assumption spurred by bigotry. Trump tried to pass off this same lie during the campaign, but was slapped down by PolitiFact:

“Trump conflates ‘illegal immigrants’ with ‘unauthorized workers,’ a group composed largely of undocumented immigrants but also legal immigrants and others. The $4.2 billion refers to the amount given in tax credit refunds for children, the large majority of whom are U.S. citizens.”

That’s right. While some of the recipients of these tax credits may have been unauthorized workers, the beneficiaries were their children. These kids are citizens who were born in the United States. In effect, Sessions is proposing that funds intended to help American children should be diverted to Trump’s border wall instead.

Perhaps the biggest deception in this mean-spirited scheme is even if the beneficiaries were Mexican, the money wouldn’t be coming from Mexico. These are funds from the U.S. Treasury collected from U.S. taxpayers. So it’s Americans who would be paying for the wall with money originally intended to help American kids. But Sessions is trying to spin it as a way to get Mexico to pay. The dishonesty and cruelty of this contrivance is nauseating – and typical of Team Trump.