With each passing day the precarious status of Donald Trump’s presidency becomes ever more wobbly. The latest controversy involves disquieting allegations that Trump disclosed top secret intelligence information to Russian officials visiting the White House. Since this story first broke, the President and his shills have offered varying responses. They began with outright denials. Then, undercutting his own staff, Trump tweeted that it was true, but legal. The record to date is one of diversion and obfuscation. 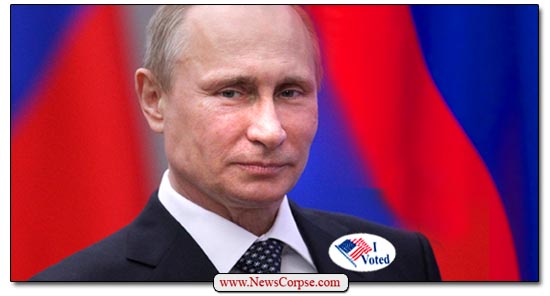 Enter Vladimir Putin. The man credited with putting Trump in the White House has come to the rescue of his most valuable asset. Speaking at a news conference in Sochi, Putin criticized the turmoil surrounding Trump. He asserted that “[T]he United States has been developing political schizophrenia.” It’s hard to argue with that. However, Putin’s solution to the problem only exacerbates it. Talking Points Memo is reporting that:

“Russia President Vladimir Putin offered Wednesday to turn over to Congress records of President Donald Trump’s discussions with Russian diplomats in which Trump is said to have disclosed classified information. His offer added a bizarre twist to the furor over Trump’s intelligence disclosures. […] Putin told a news conference that he would be willing to turn over notes of Trump’s meeting with the Russian diplomats if the White House agreed.”

“Bizarre” only begins to describe this. First of all. it’s significant that Putin has a record of the White House encounter that he’s willing to make public (if the White House agrees). Particularly because the President has made no such claim or offer. In fact, only Russia’s press were permitted into the meeting. The U.S. media was explicitly excluded. Furthermore, what makes Putin (or anyone) think that his transcript would be considered a credible account of what occurred? He has an obvious vested interest in concealing any transfer of intelligence data he acquires from Trump. His own spy network would benefit from the data more if his foes in Israel, Syria, and elsewhere were in the dark.

Putin’s offer can serve as much more than a life preserver for the floundering American president. It can also be exploited by conservative media to protect Trump from further criticism. That would fit with Russia’s known efforts to plant stories in the press that advance their foreign policy goals. Russia has been determined to be the source of thousands of self-serving fake news articles. This could just be the latest part of that ongoing propaganda effort.

From press reports it’s unclear exactly what sort of documentation Putin has. According to NPR he used the Russian word “zapis” which can be translated as either a written record or a recording. That opens speculation as to whether the Russian diplomats brought surveillance equipment into the Oval Office. NBC’s Andrea Mitchell had an opportunity to address that with Secretary of State Rex Tillerson Wednesday morning. His response was somewhat unnerving:

.@mitchellreports: "Do you think the Russians were bugging the Oval Office?"

Secretary Tillerson: "I would have no way to know that." pic.twitter.com/SiaENtA9K1

Really? How hard would it be to sweep the Oval Office for listening devices? And shouldn’t he be a little worried about the prospect that Russia could bug the White House and he wouldn’t know? This is just further evidence that Team Trump is dangerously inexperienced and incompetent. And that’s the best case scenario. The worst case is that Trump isn’t worried about Russian listening devices because he is the listening device. If he’s telling our secrets to the Russians himself, then why would would they need to plant a bug?

3 thoughts on “DAMAGE CONTROL? Putin Offers Transcript of Trump’s Meeting with Russians to Rescue His Puppet”