Donald Trump is currently on the first foreign trip of his presidency. The White House is portraying it as an effort to advance global cooperation and peace. His itinerary begins in Saudi Arabia, a nation with a dismal record on human rights and terrorism. 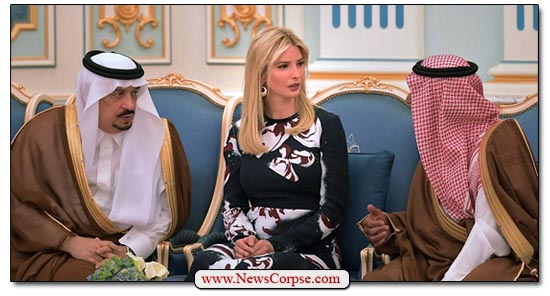 The featured accomplishment of the trip so far is the signing of an agreement to sell $110 billion dollars of weapons to Saudi Arabia. That deal has raised concerns among foreign policy experts. They worry that the weapons could be used to further Saudi Arabia’s attacks in Yemen. Those missions have resulted in untold numbers of civilian casualties. In addition, there is concern that some of the weapons could fall into the hands of terrorists. President Obama had withheld certain categories of arms from Saudi Arabia for that reason, but Trump is permitting their sale.

Not mentioned in the Trump PR blitz is a “coincidental” financial arrangement that involves the President’s senior advisor – and daughter. Last month Ivanka Trump announced that she was working with the World Bank to start a “massive fund” to boost female entrepreneurship. The ethical dilemmas surrounding such a venture were immediately apparent. Ivanks’a role in the White House, and influence with her president father, are hard to dismiss. Consequently, the news today from the Wall Street Journal is somewhat more than troubling:

“The World Bank plans to announce Sunday at an event with Ivanka Trump, the U.S. president’s daughter and senior White House adviser, that Saudi Arabia and United Arab Emirates have pledged $100 million collectively toward a fund for women who own or want to start businesses, according to people familiar with the announcement.”

The advancement of women’s rights in business is unarguably an admirable pursuit. However, it is curious that Saudi Arabia is Ivanka’s premiere partner. The Kingdom is not known for its fair treatment of women. Their rights are severely curtailed, including being prohibited from independently obtaining a passport or driving a car.

Ivanka is travelling with the President this week and attending various meetings. She was at the signing of the arms deal before Sunday’s event announcing the donation. The converging optics of these two affairs are disquieting. There is an implied relationship between the donation and the arms deal. While there is no direct evidence of any quid pro quo, the perception of impropriety is inescapable. Even Trump’s press secretary, Sean Spicer, promoted it on Twitter

This is especially notable considering how Trump castigated Hillary Clinton for far less during the 2016 election. He called the Clinton Foundation a “criminal enterprise.” Trump also raised the subject at a debate (video below), demanding that Clinton return donations made by Saudi Arabia. He posted this on Facebook last June:

“Saudi Arabia and many of the countries that gave vast amounts of money to the Clinton Foundation want women as slaves and to kill gays. Hillary must return all money from such countries!”

This is the same Saudi Arabia that Trump is now effusively praising as a “magnificent Kingdom.” It’s the same country with which he just signed a “tremendous” deal to supply billions of dollars of modern weaponry. And it’s the same country that is now giving the Ivanka aligned foundation $100,000,000.00. Does that mean Ivanka is running a criminal enterprise? Is that pay-to-play? Will Trump ever acknowledge the hypocrisy? Will the media address it? Stay tuned.

Trump criticizing Hillary for accepting $ from Saudi Arabia. Ivanka's proposed foundation will be taking $100 mill from S.A. and U.A.E. pic.twitter.com/Wt301oZ3Tn