If you’re seeking further evidence that Donald Trump is unfit for the presidency, you don’t have far to look. This week Trump attacked MSNBC’s Mika Brzezinski in a deranged tweet that was both offensive and false. In a paranoid rant he charged that all of Robert Mueller’s staff are Hillary Clinton supporters. He accused President Obama of colluding with the Russians during the 2016 presidential election. It is increasingly obvious that he is on a mental cliff’s edge and leaning dangerously toward the abyss. 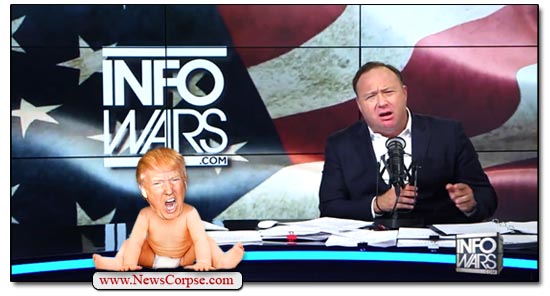 That only makes this new revelation all the more troubling. Conspiracy theorist extraordinaire, Alex Jones of Infowars is a staunch ally of Trump. While campaigning Trump appeared on his radio program and praised his “amazing” reputation. Jones asserts that he talks to Trump frequently and that Trump takes policy ideas from his broadcasts. A Jones “correspondent” was actually granted a White House press pass last month. And yesterday this exchange took place between Jones and his guest, Robert David Steele (video below):

Steele: This may strike your listeners as way out but we actually believe that there is a colony on Mars that is populated by children who were kidnapped and sent into space on a 20 year ride. So that once they get to Mars they have no alternative but to be slaves on the Mars colony.

Jones: Look, I know that 90 percent of the NASA missions are secret and I’ve been told by high level NASA engineers that you have no idea. There is so much stuff going on. But then it goes off into all that, that’s the kind of thing media jumps on. But I know this: we see a bunch of mechanical wreckage on Mars and people say, “Oh look, it looks like mechanics.” They go, “Oh, you’re a conspiracy theorist.” Clearly they don’t want us looking into what is happening. Every time probes go over they turn them off.

Let that sink in for a moment. These freaks actually believe that NASA is sending kidnapped children to Mars. Then they are putting them to work on some unspecified projects. What could they be doing? And all of this being covered up by the thousands of scientists and administrators at the space agency. This would an awful science fiction movie.

Steele also alleged that pedophiles are not just sodomizing children. They are also “terrorizing them to adrenalize their blood,” and murdering them for bone marrow and body parts. Jones listened intently to this lunacy and supported his guest’s ravings. It’s exactly the same sort of nonsense that fueled Jones’ “Pizzagate” scandal. In that affair he alleged that Hillary Clinton and others were running a child sex ring in the basement of a Washington, D.C. pizza parlor. He later had to retract those allegations under threat of a lawsuit.

This is the sort crackpot commentary that is a routine part of the Infowars program. Sadly, NASA had to make a public statement denying the conspiracy. And the fact that Trump admires Jones and gives him unprecedented access to the White House is both absurd and frightening. Prior to the Trump presidency, Jones was regarded as a kook who resided on the lunatic fringe. Now he is a trusted insider with the President’s ear.