Score one for the free market. Six months ago MSNBC hired Greta Van Susteren to host an early evening hour program. It was a peculiar choice considering the network’s success with their more progressive personalities in primetime. There was never a good case to be made for a former Fox News host succeeding on MSNBC. Their existing audience surely wasn’t clamoring for more Fox-style news analysis. And no one who watches Fox would be caught dead tuning in to MSNBC. 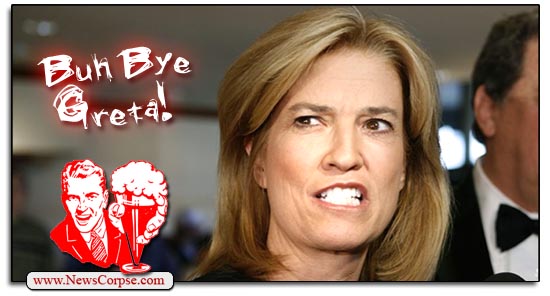 Nevertheless, the network’s management took the plunge. An apt metaphor considering how deep the ratings for Van Susteren’s show sank. The show was virtual sinkhole in the schedule. Both its lead-in and lead-out had more viewers and better ratings. People were clearly changing the channel when Van Susteren’s show started.

Van Susteren’s weakness occurred while the rest of the network’s program’s were soaring to record highs. Rachel Maddow has frequently beaten her Fox News competition and landed at the top of all cable news programming. The same is true for her colleague Lawrence O’Donnell. Van Sustern wasn’t even performing as well as Maddow’s and O’Donnell’s repeats.

So after six months, MSNBC management has seen the light and diplomatically announced a parting of the ways. Network president Phil Griffin said:

“MSNBC and Greta Van Susteren have decided to part ways. Greta is a well-regarded television veteran and one of only a few broadcasters who can say they’ve hosted shows at all three major cable news networks. We are grateful to her and wish her the best.”

Griffin also revealed that Van Susteren’s time slot will be filled by Ari Melber. Melber is the network’s legal analyst and host of the weekend show The Point. He has also been a frequent fill-in host for several of the network’s programs. He should be a capable, if not exciting, addition to the schedule. On the down side, he’s just another cable news white guy. Weekend anchor Joy Reid would have been a better, and more stimulating, choice.

It remains to be seen if MSNBC has realized the folly of their ways. They recently hired or promoted other right-wingers like Hugh Hewitt, Bret Stephens, Charlie Sykes, and George Will. And their big get, Fox News star Megyn Kelly, is already off to a disastrous start. Her NBC Sunday Night show premiered to abysmal ratings and went down from there. NBC execs are already somewhat frantic that she will kill the Today Show when she debuts in September. Time will tell.