The Deferred Action for Childhood Arrivals program (DACA) was implemented by the Obama administration in 2012. Its purpose was to provide undocumented immigrants, who entered the country as minors, protection from deportation. Applicants must have completed school or military service and cannot have a criminal record. The program is a humanitarian solution to the unfair punishment of young people who weren’t responsible for their immigration status. The beneficiaries are known as DREAMers because through DACA they were allowed to pursue the American Dream. 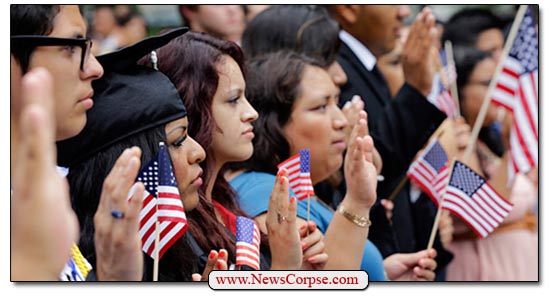 For several days Donald Trump has been teasing a final decision on the future of DACA. And on Sunday, the day that Trump declared a National Day of Prayer, he also dashed the prayers of the DREAMers. White House sources reported that Trump has decided to end DACA with a six month delay before enforcement. It’s a typically Trumpian demonstration of callous insensitivity and overt bigotry. Criticism of his decision has already begun to emerge. And the reaction by Rep. Joe Kennedy III (D-MA) is especially relevant and moving:

“It’s a cruel hand that extends the American dream and then steals it away. With a fierce faith in our country’s word, DREAMers walked out of the shadows and bravely embraced the only home they’ve ever known. In contrast, tonight President Trump gave in to his own dark fear of diversity and punished hundreds of thousands of young people for simply trusting the United States.”

Cruelty barely describes what Trump is proposing. The DREAMers registered for the program and paid $500.00 in fees. They completed school, got jobs, or enlisted in the military. Now they are identifiable and vulnerable. They believed in America and believed that this nation, the only home they ever knew, was honorable and trustworthy. What they didn’t anticipate was the hateful reign of a born liar. A con man who couldn’t care less about the dignity of keeping one’s word or honoring a promise. And now they have to live in fear of being banished to a foreign land where they may not even speak the language.

That’s what Donald Trump is putting these innocents through. Remember, they broke no laws. They were children under the care of their parents. And their parents only wanted what all parents want: a better life for their kids. It’s the promise chiseled into the base of the Statue of Liberty. It’s the pledge made by a prior administration that the current one has turned into a trap. That’s even after Trump was asked if the Dreamers should be worried, and he replied disingenuously “We love the Dreamers. We love everybody.”

.@POTUS on #DACA: "Sometime today or over the weekend we'll have a decision." Also says, "We love the dreamers. We love everybody." pic.twitter.com/YyLmhOj71w

Now, if Trump goes through with this, there will be 800,000 people whose lives are hanging by a legal thread. This is more than a humanitarian travesty. Economists at the Center for American Progress have studied the impact of ending DACA. They concluded that it “would result in a loss of $460.3 billion from the national GDP over the next decade.” The loss of the productivity of these workers and the taxes they paid would severely hamper the economy. And the decline of spending in their communities would cost business profits and jobs.

A peculiar wrinkle to the proposal being reported is the six month delay. The presumption is that Trump is giving Congress that time to draft and pass legislation to replace DACA. But what would Trump have to gain by handing this off to Congress? If they fail to act, then he still gets the blame for ending the program. If they pass legislation to preserve it, then Trump is tagged with being the racially divisive swine who tried to kill it. And he would be in the awkward position of signing legislation that reversed his own executive order.

The only possible upside would be the bolstering of Trump’s support within the alt-right, white supremacist movement. Just as with his pandering to the bigots after Charlottesville, and his pardoning of Sheriff Joe Arpaio, Trump may be playing to his deplorable base. His approval ratings are so low that he needs to cling to every potential vote, no matter how repulsive. But that’s only a plus in the perverse world of Trump and his racist followers. And it surely won’t help him with the majority of Americans who have the same dreams for the nation as DACA’s DREAMers.

2 thoughts on “DACA: The ‘Cruel Hand’ of Donald Trump Steals Hope Away From America’s DREAMers”