Earlier this week employees at Fox News revealed some serious concerns they have about the network they work for. Turns out even they are embarrassed by the blatantly biased, pro-Donald Trump “reporting” the network does. Speaking anonymously to CNN they were quoted as saying things like “I’m watching now and screaming. I want to quit.” And that “Fox feels like an extension of the Trump White House.” 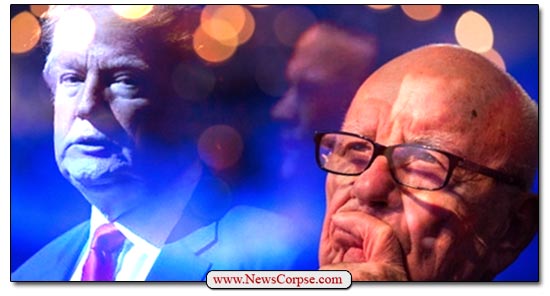 Those of us outside of Fox News noticed long ago that it is a network devoted to right-wing propaganda. And more recently it has fallen into the abyss of Trump worship. Hacks like Sean Hannity and Tucker Carlson defend every dishonest, ignorant, and hateful thing he says and does. The “Curvy Couch” potatoes of Fox and Friends spend four hours every morning polishing Trump’s – let’s say apples.

Now a new report from Vanity Fair shows that a similar internal revolt is in progress at the Wall Street Journal. Author Joe Pompeo interviewed current and former Journal editors and reporters who were highly critical of the paper’s staunchly pro-Trump editorial slant. Pompeo got Journal staffers to confess that:

Pompeo also notes that the Journal has suffered a rash of resignations recently. Many of their top reporters left to join the competition at the Washington Post, the New York Times, etc. There is speculation that those remaining are reconsidering their own prospects for the future at the Journal.

Much of the consternation has been triggered by the Journal’s recent editorials concerning Trump’s unsavory connections to Russia. In particular, some columns have been hypercritical of special counsel Robert Mueller. Pompeo summarizes the seemingly coordinated attacks saying that:

“In recent days, of course, the opinion coverage has produced controversial commentary on Robert Mueller’s Trump-Russia investigation, often flying in the face of the Journal’s own news reporting. On October 23, political scientist Peter Berkowitz proclaimed that the probe into possible collusion between Russia and the Trump campaign ‘threaten[s] the rule of law.’ Days later, an October 29 piece by two attorneys from the Reagan and George H.W. Bush administrations called on President Donald Trump to ‘immediately [issue] a blanket presidential pardon to anyone involved in supposed collusion.'” […]

“[One] editorial referred to Fusion [GPS] as ‘sleazy operators’; it didn’t mention that the guys who run Fusion were previously Wall Street Journal reporters. Former high-ranking Journal editor Bill Grueskin spoke for many when he tweeted, ‘WSJ edit page has gone full bats–t.'”

So now, in the same week, stories have emerged that feature employees of Fox News and the Wall Street Journal as being ashamed of those affiliations. It cannot be ignored that both of these entities are owned by ultra-rightist media baron Rupert Murdoch. Murdoch also happens to be a close friend and advisor to Trump. They are said to be talking to each other “almost every day.” Both have much to gain from the relationship. Trump obviously benefits from the fawning attention he gets from Fox News. And Murdoch is angling for government regulatory reforms that will advance his business interests.

However, the troops at both organizations appear to be in the throes of revolt. Apparently there is still some measure, however minuscule, of integrity lurking in the dank halls of Rupert’s Realm. And the expressions of disgust are beginning to seep out into the open. It was put into stark terms by former Journal writer Kara Swisher, now with Recode. She empathized with the poor clods still under Murdoch’s sway saying “I feel sorry for every decent reporter at the WSJ for this claptrap from Rupert Murdoch’s ever desiccated soul.”

One thought on “Trump Coverage at Fox News and WSJ is ‘Embarrassing,’ ‘Bats**t Crazy’ Say Staffers”