There is now definitive proof that Donald Trump is stomping around the Oval Office in a white-hot panic. Whether it is Special Counsel Robert Mueller, a newly energized media, or pressure from his Kremlin handlers, Trump is clearly nervous that the truth is getting closer to daylight. Or at least that someone is getting closer to the truth that Trump wants to conceal. 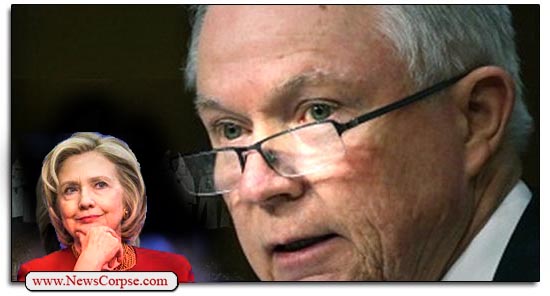 We know that Trump’s anxiety is at fever pitch because of the news just out about what’s going on at the Justice Department. His bootlicking attorney general, Jeff Sessions, has heard the call from his master and is giving consideration to a long sought objective of the President. Specifically the realization of the glassy-eyed rally chant “Lock Her Up.” According to reports:

“Attorney General Jeff Sessions is leaving open the possibility that a special counsel could be appointed to look into Hillary Clinton, Clinton Foundation dealings and a uranium deal during the Obama administration among other matters.”

In a letter to the House Judiciary Committee, a Justice Department official says Sessions has directed senior federal prosecutors to evaluate concerns raised by Republican lawmakers. The letter says the prosecutors will recommend whether an investigation is merited.”

The whole initiative is the manifestation of delusions harbored by right-wing scam mongers. There have already been numerous investigations into these matters that found no hint of wrongdoing. Despite years of baseless allegations, the Clinton Foundation remains a respected charity that has received the highest scores from philanthropic ratings organizations. The Uranium One matter has been repeatedly debunked by fact checkers.

Trump undoubtedly is buoyed by the ultra-conservatives that dominate the Republican Party and hunger for Clinton’s blood. Many have tried to push the DOJ and Trump to punish the former Secretary of State (and current grandma in Chappaqua). And of course Fox News is contributing to the lynch mob mentality. Sean Hannity has virtually given up his entire show to it. And he isn’t alone. Tucker Carlson, Laura Ingraham, and the “Curvy Couch” potatoes of Fox and Friends are all in. Fox’s Jeanine Pirro even met with Trump to urge him to proceed with a Clinton prosecution.

But there are other reasons that consideration of persecuting Clinton is ludicrous and brazenly dishonest. For one thing, if Sessions intends to direct his staff to recommend whether an investigation is merited, he will be violating his statement made under oath to Congress:

“Sessions said he had made comments during the ‘contentious’ campaign about Clinton’s use of the email server and her family’s charitable foundation that could place his objectivity in question.”

“‘I believe the proper thing for me to do would be to recuse myself from any questions involving those kind of investigations that involve Secretary Hillary Clinton,’ the Alabama Republican told senators on the Judiciary Committee.”

That’s an unambiguous promise by Sessions to recuse himself from any Clinton investigations. But his stated consideration of appointing a second special counsel overtly breaches that promise. In addition to Sessions’ prior statements, Trump also expressed his disinterest in pursuing any Clinton queries. this what he said last year on the subject:

Trump is pressed if he has definitively ruled out prosecuting Hillary Clinton. “It’s just not something that I feel very strongly about."

However, like pretty much everything Trump says, it will eventually be contradicted by something else that Trump says. More recently he has frantically returned to his obsession with Clinton and has been behaving like the tin-horn dictator he aspires to be. Here he is openly and improperly beseeching his Justice Department to go after Clinton despite not feeling strongly about it.

Sorry, but this is years ago, before Paul Manafort was part of the Trump campaign. But why aren't Crooked Hillary & the Dems the focus?????

Everybody is asking why the Justice Department (and FBI) isn't looking into all of the dishonesty going on with Crooked Hillary & the Dems..

Legal experts will note that Trump’s pressuring the Justice Department violates long-standing protocol to insure the independence of the department. He has no more business asking for investigations or special counsels than he does firing them. It is a blatant abuse of power and potentially impeachable obstruction of justice.

The fact that Sessions now appears to be caving to Trump’s demands to abuse his legal power and prosecute a former political rival speaks to the fear that must be enveloping the White House. He must feel the warm breath of justice on his neck. And he thinks it’s a proper response to attack his political adversaries with the full force of the government he so incompetently leads. That’s what happens in authoritarian regimes ruled by self-absorbed tyrants. The United States must not allow that to happen here. Donald Trump must be impeached before he’s allowed to inflict more harm on the nation – and the world.