As evidence that Fox News is descending ever further down the rabid hole, they just hired radio talker Mark Levin. Anyone who thought that Rupert Murdoch’s sons were going to moderate the networks extremist right-wing blather can put those fantasies aside. Levin is the worst of the worst who has embraced the most ludicrous conspiracy theories and engaged in the most heinous hate speech. 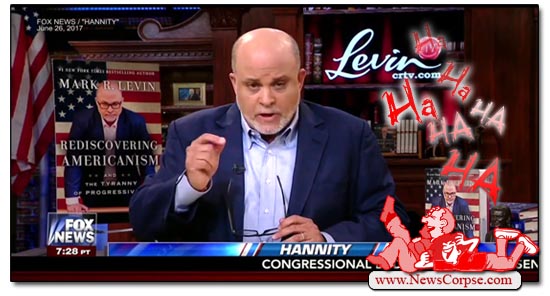 Levin is an OT (Original Trumpster) who has been fawning over Donald Trump from the start of his presidency. Although during the campaign he was a Ted Cruz supporter and lashed out at Fox News saying “it’s not the Fox News Channel — it’s the Fox Channel, and the Donald Trump super PAC.” He should have stuck with that assessment. Instead, he now works for them. He is also a close friend of Sean Hannity, who has been featuring Levin on his show for several weeks. For a primer on Levin’s ultra-conservatism, check out these rhetorical departures from reality that he has propagated over the years (courtesy of Media Matters):

From all appearances, Sean Hannity has taken over Fox News. Levin is one of his goto guests who reliably bashes President Obama, Hillary Clinton, and all things liberal. Hannity also recently got Fox News to hire former Glenn Beck protege Tomi Lahren. And now the Hannity show is so consumed by conspiracy delusions that it is challenging Alex Jones for the Conspiracy Crackpot Crown. Among Hannity’s obsessions is Hillary Clinton, who has become such a regular feature of the show that CNN’s media correspondent, Brian Stelter, suggested renaming it The Clinton Scandal Hour.

Unfortunately for Fox News, Hannity’s programming philosophy is a proven catastrophe. That style of unhinged wingnut outrage is wearing thin and losing viewers. His program, which recently moved to a time period opposite MSNBC’s Rachel Maddow, is frequently getting beat in the ratings race. That’s something that was unheard of a couple of years ago. And the addition of screaming screwball Levin isn’t likely to turn anything aroung for Fox. So let’s all welcome Mark Levin to the Titanic of cable news.