The debate over Donald Trump’s obsession with disgorging himself on Twitter has stirred a variety of opinions. Many people say he is reckless, insulting, and childish, and that his outbursts can be damaging to American interests. Others say he is just just expressing himself and it shouldn’t be taken seriously. Those in the latter groups are wrong. 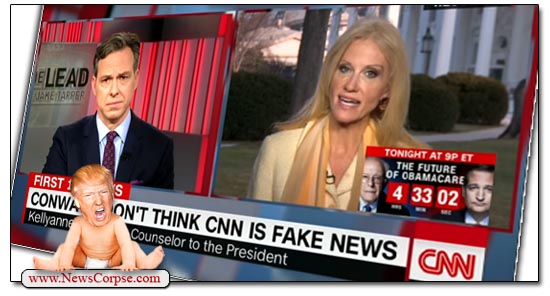 On Saturday Trump post a tweet that, on the surface, appeared to be typical Trumpian bluster. It was another assault on the free press that he despises so furiously. This particular message was directed at CNN’s international news bureau:

.@FoxNews is MUCH more important in the United States than CNN, but outside of the U.S., CNN International is still a major source of (Fake) news, and they represent our Nation to the WORLD very poorly. The outside world does not see the truth from them!

Needless to say, Fox News is only important to conservative partisans who need reinforcement of their political prejudices and deceit. It’s a vital outlet for right-wingers who can’t think for themselves. But the more disturbing part of this tweet is Trump’s slander of a major American news source and its international journalists who risk their lives to tell stories critical to the welfare of the our country and our world. And the damage that Trump’s infantile tantrums can cause was just revealed in a horrific way, as reported in The Guardian:

“A tweet by Donald Trump accusing CNN of purveying ‘fake news’ has been seized on by Libyan media to challenge a report by the US broadcaster which suggested modern day slave auctions were being held in the country. […] in a sign that the US president’s persistent attacks on the credibility of American news outlets has a real world effect, the broadcaster Libya 218 used the tweet to question the credibility of the CNN video.”

In other words, the perpetrators of slave trade in Libya were caught in the act, but were able to dismiss the charges using Trump’s criticism of CNN as proof that their reporting can’t be trusted. The Guardian’s story went on to say that Libyan broadcasters regarded CNN’s reporting as an effort “to secure an as yet hidden political objective.”

So what Trump has done is to assist the slavery market in Libya, and everywhere else, by telling the world that the President of the United States thinks CNN’s reporting is fake. That message can and will be extended to all other criminal activities uncovered by dedicated and courageous journalists. And this is precisely what Trump intends. He hopes that his media smear campaign will have the same effect domestically as his own crimes are revealed.

When special counsel Robert Mueller completes his investigation, the press will report his findings related to Trump’s collusion with Russia, his financial corruption, and his attempts to obstruct justice. When those reports come out Trump will slander them as fake and hope to avoid the consequences of his lawless depravity and greed. But he may have more trouble with the American press than its counterparts in Libya. With the exception of Fox News, we don’t have a state-run media in the U.S.