Friday morning Donald Trump’s former National Security Advisor, Michael Flynn, pleaded guilty to lying to the FBI. It’s a charge emanating from the investigation by special counsel Robert Mueller. The relative minor infraction suggests the Flynn is fully cooperating with Mueller’s probe and has material evidence to trade for his leniency. In fact, Flynn’s statement explicitly references his “guilty plea and agreement to cooperate with the Special Counsel’s Office.” 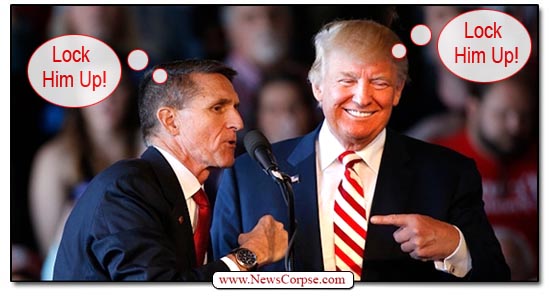 However, there is more to his statement and plea bargain that is likely to make things very dicey for Donald Trump. That includes the fact that Flynn’s offenses took place while serving in the administration. Which should make it difficult for Trump to credibly put distance between Flynn and himself. But Trump, being Trump, couldn’t care less about making a rational assessment when it’s much easier for him to float ludicrous implications against his arch enemy, President Obama. The White released the following statement in response to the news of Flynn’s guilty plea:

“Today, Michael Flynn, a former National Security Advisor at the White House for 25 days during the Trump Administration, and a former Obama administration official, entered a guilty plea to a single count of making a false statement to the FBI.

Note the slyly worded attempt at misdirection: “and a former Obama administration official.” Does Trump really think he’s going to get away with this subliminal effort to blame Obama for the Flynn affair? Probably. He is just that nuts. And after all, Trump will have the assistance of Fox News to manipulate the narrative and shift the focus to his predecessor. But most Americans will simultaneously laugh and cringe when they see this transparent act of desperation.

For the record, Obama fired Flynn from his post as head of the Defense Intelligence Agency. So he can hardly be held responsible for Trump later embracing him. What’s more, Obama personally warned then President-Elect Trump not to hire Flynn as his National Security Advisor. But Trump ignored that warning and hired him anyway. Only to push him out less than a month later.

With regard to Flynn’s “resignation,” it was accepted reluctantly by Trump, who continued to praise Flynn on his way out the door. “I don’t think he did anything wrong. If anything, he did something right,” Trump said about Flynn’s discussions with Russian officials. Trump commended Flynn for “doing his job,” and gushed that “I think he’s a fine man.” For Trump to now pretend that it was somehow Obama’s fault that he cozied up to a scoundrel like Flynn is further evidence of his failing mental state.

The Trump administration is well aware of how flimsy their pivot to Obama is, and they are already floating alternative excuses. One suggests that Flynn’s lies (and by extension Trump’s) are no big deal because “everyone lies in Washington.” That’s the sort of justification that can only be proposed by a pathological liar. Therefore, it’s no big surprise that Trump is proposing it. During his campaign he promised to drain Washington of just this sort of swampiness. Of course, a quick glance at his administration, and his policies, reveal that to be just another one of the profusion of falsehoods he has unleashed since he took office.

2 thoughts on “WTF? Trump Statement on Flynn Guilty Plea Puts the Blame on – Wait For It – President Obama”