We all need to let this sink in. The Republican-controlled Congress is frantically trying to get a tax bill to Donald Trump’s desk before he is impeached. The bill itself is a redistribution of wealth from the poor and middle classes to the rich and corporations. It will balloon the national debt and cause millions to lose their health insurance. But all of this is being pursued under extraordinarily peculiar circumstances. 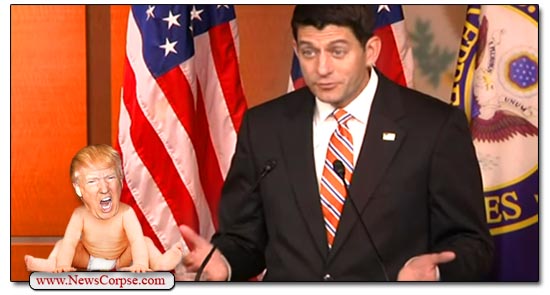 What we are witnessing is a spectacle headlined by the least popular president in modern times. His approval ratings would need to improve substantially to reach the gutter. Gallup has him at a death-defying thirty-five percent. That’s just two points off of his all-time low of thirty-three percent earlier this week. He’s been mired in the low thirties for months. He has never risen above the forty-six percent he achieved at his inauguration.

The Congress is faring even worse. They are currently suffering an approval rating of only thirteen percent. That’s down by more than half from the already awful rating they had at the beginning of this session. Considering the fact that they have passed no significant legislation at all since then, it isn’t hard to understand the decline. All they have done is tried (and failed) three times to kill the popular ObamaCare program and find ways to defend Trump’s ignorance and divisiveness.

So Congress is going all in on a tax “reform” bill that promises to boost the economy, create millions of jobs, and cut taxes for everybody, without raising the debt. All of that has proven to be outright lies. The wealthy will be the only beneficiaries of this bill, while most middle class Americans will see tax increases. And the deficit will rise by more than a trillion dollars. Not surprisingly, this bill has garnered little support among the public. A paltry twenty-nine percent of voters support the GOP Tax Scam. More than half (56%) oppose it.

So what we have here is the most hated President in modern times pushing a despised Congress to pass a bitterly unpopular tax bill. It’s a thoroughly Republican project that got zero votes from Democrats. Nevertheless, the GOP is pulling out all the stops to force this garbage down the country’s throat whether they like it or not (they don’t).

And throughout the process we are being told lies by representatives who have lost any pretense of decency. They are even going so far as to support a child molester for the senate in Alabama to insure they have the votes they need for this abhorrent legislation. Let’s hope the American people remember this betrayal by their so-called representatives and vote them out of office next November. Then we can get on with the business of impeaching the traitor in the White House.