Last year was a banner year for MSNBC as it ratings surged to unprecedented new highs. Much of this was driven by the soaring popularity of Rachel Maddow, but the rest of the network’s roster enjoyed similar success. Many of the programs achieved their highest ever ratings in 2017, a year that suffered through the painful presidency of Donald Trump. 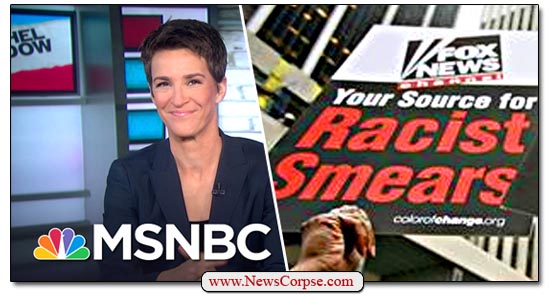 There is speculation that Trump’s historically low approval ratings fueled some of the growth at MSNBC as viewers sought out news related to the latest Trump scandal. But that’s far too simple an explanation. Trump’s yammering about what he called “fake news,” but was actually just any news he didn’t like, didn’t fool the American people. They were more interested in credible journalism that relied on facts and honest analysis.

MSNBC benefited from that trend in the information marketplace. But they also benefited from a commitment to producing well-rounded coverage of a diverse nation. As a result, the latest report from Nielsen shows that MSNBC drew more African-American viewers during prime time than any other cable network. That’s not just any other cable news network, but any network of any type. Here are the rankings:

An especially notable omission from that list is Fox News. Their appeal to African-Americans wasn’t even enough to land them in the top 10. So if you ever wondered how Fox News gets away with filling their schedule with such brazenly racist programs and commentaries, these Nielsen numbers might provide the answer.

This certainly was not a new development for Fox News. News Corpse reported in 2014 that Fox’s share of the black audience was a pitiful one percent. This can explain why Fox News doesn’t worry about the consequences of broadcasting overtly bigoted content and dismissing all allegations of racism as “race hustling.” After all, they have little to lose by offending a segment of the television universe that doesn’t watch their programs anyway.

There’s no reason to expect any of this to change in the foreseeable future. Fox News is just as devoted to inciting racial animus and division as ever. And their defense of Trump, along with his blatantly prejudiced views and policies, will only exacerbate the situation. If anything, Fox’s prime time lineup has become more racist with Sean Hannity’s hate-speech being joined by white nationalist Tucker Carlson and notorious xenophobe Laura Ingraham. So look for MSNBC to continue its rise in the ratings while Fox News grows more narrowly focused on the all-white, alt-right viewers who represent their dwindling audience.