Donald Trump may be the most poll-obsessed president in history. While it’s common for politicians to insist that they don’t care about polls, Trump’s behavior is more typical of a television performer who relies Nielsen ratings to affirm his popularity. Wonder why? He relentlessly posts survey results that he thinks portray him positively. Although, upon further scrutiny, that is often not the case. 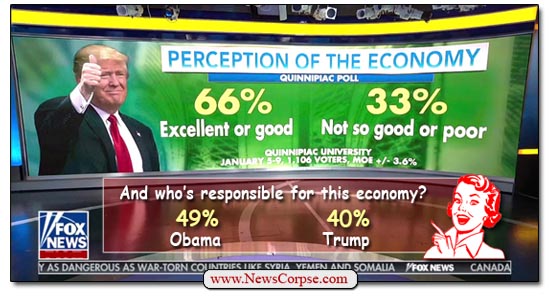 An example of this occurred during Trump’s “Executive Time“ on Thursday morning. He tweeted the results of a Quinnipiac University poll that asked whether voters considered “the nation’s economy these days as excellent, good, not so good, or poor.” Sixty-six percent responded that the state of the economy was either excellent or good. But since Trump couldn’t be bothered to read any further than the headline, which he very likely picked up from Fox News (see the Fox and Friends graphic above), here are the results that put that number in context:

Forty-nine percent of voters said that former President Barack Obama is more responsible for the state of the economy, while only forty percent gave credit to Trump. Even twenty-four percent of Republicans chose Obama. When asked if Trump’s policies are helping or hurting the nation’s economy, fifty-nine percent of voters replied that they are hurting or made no difference. Seventy-three percent said that Trump’s policies hurt or made no difference to their personal financial situation.

Clearly Fox News was fulfilling its mission to fluff Trump’s ego by cherry-picking poll results that they knew would please the President. He has to be carefully tended to in order to avoid unnecessary fits of rage and depression. For his part, Trump ran with the sliver of data that he was fed by Fox News, tweeting it with pride, but without knowledge of how pitiful his standing really is with the American people. Some other results from the poll elaborate on just how poorly he is perceived:

Finally, survey respondents graded Trump’s first year in office with thirty-nine percent giving him an “F” and another seventeen percent give him a “D.” Those aren’t exactly the sort of grades you’d expect from a “stable genius.” So it isn’t surprising that both Fox News and Trump ignored most of this poll’s data. However, just by tweeting the one bit of news that he thought was positive, all he really did was send more people to the poll’s full results where they found out the whole truth. Nice work, Donnie.