David Letterman is about to launch his new interview program “My Next Guest Needs No Introduction” on Netflix. It’s a much anticipated return for an American icon who has been greatly missed. The same thing could be said about his first guest, President Barack Obama. 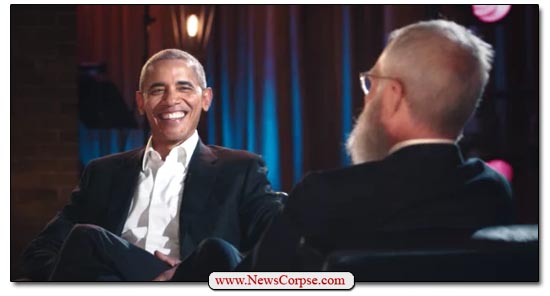 A few excerpts from the interview are beginning to make the rounds on TV. Some are charming insights into his personal and family life. But one is a particularly timely commentary on the divisiveness within, and caused by, the media. Obama told Letterman that:

“One of the biggest challenges we have to our democracy is the degree to which we don’t share a common baseline of facts. What the Russians exploited, but it was already here, is we are operating in completely different information universes. If you watch Fox News, you are living on a different planet than you are if you listen to NPR. […] At a certain point you just live in a bubble and I think that’s why our politics are so polarized right now.”

Ya think? The current controversy surrounding Donald Trump’s vile and racist remarks about “sh*thole countries” like Haiti and those in Africa perfectly illustrates the information gap that divides Fox News from the rest of the world. While almost every other media outlet has properly reported Trump’s bigotry, and the well-deserved outrage it incited, Fox News had a completely different take on the matter. Here are a few of the defenses and justifications that are typical of the Trump-fluffing network:

Not only are these Fox News cretins dismissing the rampant racism in Trump’s blackened heart, they are accusing every American of having exactly the same feelings. They think it’s perfectly alright to denigrate entire continents because, in their warped view, it’s what all Americans believe.

Thank goodness that isn’t true. But even to the extent that Trump’s base does harbor these repugnant thoughts (and, sadly, they do), that’s still not an excuse. The notion that it’s an asset for an American president to talk like the souse at the end of the bar is terribly misguided. Hopefully our national leaders are far better educated and prepared for the duties of governing and diplomacy than the slack-jawed yokels Fox News aims their programming at. The old polling inquiry about which candidate a voter would rather have a beer with was always an absurd measure of qualifications.

Donald Trump exemplifies the worst of the perverse concept that presidents should be “just like me.” They shouldn’t. They should be way better than me. But the alternate universe that Obama is describing exists on Fox News where they take this idea to its most reprehensible extremes. Fox’s audience will lick it up, thinking that they would be just as good at being president as anyone else. And the more Trump acts like a hate-filled moron who says whatever idiotic mental glitch pops into his diseased brain, the more the Fox cultists will feel enabled and empowered. And the more imperative it is to fight back against this looming devolution of society.